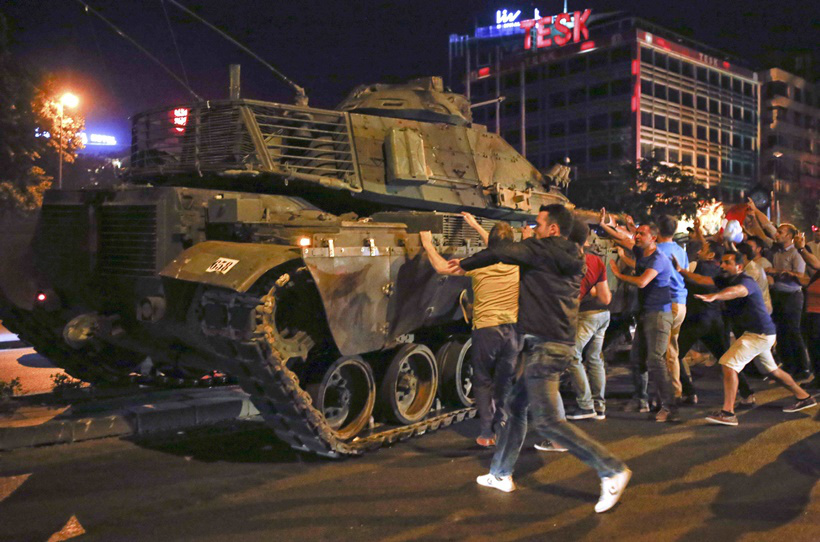 Turkey is a great country increasingly regarded as a model of a modernised Muslim state thriving under secular rule and enjoying economic prosperity. With a delicately crafted parliamentary constitution, the state structure was designed for inclusivity and secularity for a long lasting stability. Under the presidency of former President Abdulahi Gul when current President, Recep Tayyip Erdogan served as Prime Minister, the country grew in leap and bound and energised one of the most powerful stable and potent Islamic state serving as critical bridge between Europe and Asia.

When Erdogan assumed the presidency, that giant developmental strides continued with most Muslim nations looking towards Ankara instead of troubled Egypt or the ever conservative Saudi Arabia. It all looked so well especially as Erdogan had also struck a deal with separatists militants, a deal many thought would mark the end of the insurgency.
Turkey was indeed a model already being recommended by western powers for nations with predominant Muslim population.

Along the line, a new trend suddenly emerged. The foundation on which the new ruling elite under Gul-Erdogan thrived, was enmeshed in divisive infighting. Instead of the near collegiate structure that built the new Turkey, a strong Erdogan targets near absolute power.

Series of reforms were then attempted which ruptured the power structure. The first casualty was the Fetulen Gulen movement which is now being accused of masterminding the foiled coup.

Gulen is a renowned sufi master based in Philadephia in the United states. With mass following all over the world, the Gulen movement was responsible for the thriving Turkish soft power that you see all over the world. Turkish schools and hospitals across the world which actually project the new Turkey to the world are sponsored by the
movement. Back in Turkey, the movement has strong followership in the media,universities, industries and state institutions. In reality and at the risk of exaggeration, Gulenists run Turkey at home and abroad.

That scenario was antithetical to the political design of the new president. Gulen as a counter power center was seen as an impediment.

Hence, a battle line was drawn between the movement and the Erdogan clan, leading to closure of schools, newspapers and even factories that allied with the movement. Gulen himself was accused of coup plot then as it is now with Ankara seeking extradition.

While the battle with the movement was on, the president concurrently pursued his goal of a presidential system of government which will produce a new constitution under which he can possibly stand again as a candidate. This was subtly opposed by key segment of the society, the press, the academics, the minorities and elements within the
security services. That opposition created a systematic repression of journalists, academics, human right activists and non conformists state officials. Rule of law is endangered and democratic order is regularly shaken by actions and conducts known to be in breach of the constitution.

Power consolidation with attendant rupture was followed by several deadly terrorist attacks in key cities. The level of insecurity was so much that many analysts were wondering if the President has lost control. The face-off with Russia has weakened the economy. The Syria policy was a disaster and the mix up with Islamic state dents the image of the state. His moderate Prime Minister, a university professor had to quit in the face of disagreements.

Hence, prior to the attempted coup, Turkey was not itself both internally and externally. While the president still has huge support going by results of elections, internal dissent has been on the increase. Many were disenchanted with the clampdown on press freedom and rule of law. There were apprehensions that dictatorship is on the
horizon.

But what can Africa and her leaders take away from this foiled coup? What should the coup propels African leaders to do as a matter of urgency? I know the reactions across presidential palaces will be to review security apparatuses, strengthen weak points and reinforce the presidential guards. Some may also be conducting loyalty test for security officials while in due course, some presidents may purge their institutions in an attempt to plant undiluted loyal hands.

Some other more tyrannical leaders may already launched secret clampdown on vocal critics and opponents. The media may become more targeted. Surveillance of social media may be tightened. In fact, more African states may be procuring internet surveillance equipment. Shutting down the internet may become attractive than ever before.

But can there be other responses? There is the need to learn bitter lessons of history. About thirty or so years ago, President Yuweri Museveni launched a rebel movement which eventually toppled the dictators of Kampala. Ever since, he remains the President, ruling with iron fist. Is there a lesson for him and other long term rulers across African countries?

Democracy is so far the most enduring system by which humanity can effectively manage and govern themselves. It is a system tested and confirmed as self regulatory and imbued with sufficient checks and balances to deliver on the aspirations of the people. While it is not perfect, there is as yet no alternative to it. It is cyclical as power
exchanges hands depending on the will of the people. It is accountable as leaders and followers can be called to account for their actions. More critically, civilised people embrace democracy as rule of the people and not of one man.

African leaders who uphold democratic norms are great agents of development and progress. They abound on the continent. They ensure free and fair elections; they uphold the rule of law; they enforce equality of their citizens; they are fervently loyal to the constitution and most importantly, they are incorruptible.

What we get from Turkish people is that even when a leader is transforming into dictatorship, the people still hold tightly to democracy. They are not defending Erdogan; they are not upholding and endorsing his suppression of free speech; rather they are jealously guiding democratic order which they know President Erdogan cannot take away from them.

Another lesson is that repression of the citizenry breeds, strengthens and unleashes anti- democratic forces on the country. When a leader shut down avenue for democratic conduct, he gives ventilation to the forces of anarchy. When free and fair election is denied, the citizenry, alternative route to change of government is contemplated. When the rule of law is savagely disregarded, the constitution is
undermined.

Africa can smartly exit the tag of Dark Continent when sit tight leaders realise how barbaric their conducts are, how repression of their own people further blackens ratings of Africa, how their stone age mentality degrades Africans all over the world.

If leaders remain committed to rulership forever, more hands may be available for arms bearing.