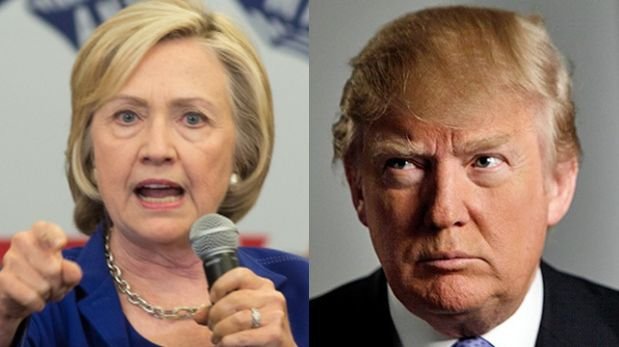 Officially the United States of America 2016 Presidential election has been narrowed to a contest between Donald Trump a businessman  and Mrs . Clinton a former Secretary of state. Recent polls released just after the Democratic national convention have given Hillary Clinton a lead over Donald Trump, suggesting the Democratic nominee for president is enjoying a significant post-convention boost. The real argument is what will happen between now and November the date of the election. Poll figures are producing different results already, depending on whose research publications one chooses to read and believe.

For example, the figures obtained from an online nationwide survey, conducted on Friday July 29 and published by RABA Research, gave Clinton 46% support to Trump’s 31% among likely voters. The Libertarian candidate, Gary Johnson, was at 7%. A poll taken by the same company on 12 July had put Clinton 12 points up on Trump, indicating an improved result for Clinton after her acceptance speech. Nearly all the other polls have given Clinton a narrower margin of lead and in a few cases Trump has a slight lead. This is the kind of publication and campaign likely to prevail till the actual election results are known in November 2016.

But from hindsight polls don’t determine election results, instead candidates change the poll figures and win voters that way. That is, poll figures are just observations of randomly selected likely voters. A well conducted polls can predict the results with very minimum margin of inaccuracies. Polls are to assist candidates to do more campaign and turn the figures to their favour, especially from undecided possible voters.

The campaigns are to sell candidates, pinpoint their abilities and limitations, their health and endurance levels, their character and hidden traits under pressure, etc. For example the two candidates, Trump and Clinton, are rather on the old age side and less healthy for the tough job they are seeking. If they cannot take to their doctors’ advice the campaign drilling will test their health. We need to watch the numbers of lateness, postponements and cancellations of appointments and schedules. We also need to watch how they run down the staircases or step out of buses. Even Obama and Putin are much healthier than these old and frigile candidates. Nigerian youths must push for healthy candidates and not those who will be sleeping on the job and taking medical vacations often. Meanwhile let  us compare the resumes of the  two front runners, Clinton and Trump.

Mrs. Hillary Diane Rodham Clinton was born in 1947. She   is an American politician and the nominee of the Democratic Party for President of the United States in the 2016 election. She served as the United States Secretary of State from 2009 to 2013, the  United States Senator representing New York from 2001 to 2009, First Lady of the United States during the presidency of her husband Bill Clinton from 1993 to 2001, and First Lady of Arkansas during the governorship of Bill Clinton from 1979 to 1981 and from 1983 to 1992. Hence Mrs. Clinton has a long list of a royal resume as her curriculum vitae and must be very at home in the White House.

Donald John Trump was born in 1946, he is an American businessman, television personality, author, real estate developer.  He is a billionaire but less experienced in politics and world affairs than his rival. He is the 2016 Republican presidential election candidate. Already he has many inflammatory tongue lashings against the Blacks, Muslims, Latinos, females and others.

Donald Trump’s image in controversies started in 1980, when he opened the  Grand Hyatt which made him the city’s best-known and most controversial developer. His marriages were to add  further to his public image in controversies. It appears to us that Donald Trump was born to act and think big, whether or not his ideas are achievable. His wives are most probably in the best positions to introduce the life of a man they had shared at one time  the other. The wives are (3) Melania Trump (2005 to date),  (2) Marla Maples (1993–1999) and (1) Ivana Trump (1977–1992). These women could cause Donald Trump to lose in his ambition to be United States of America President in 2016 election. He has about five children from these marriages alone.

We are therefore dealing with two different individuals and testing them when the world is entering a heterogeneous political environment, uncharted terrains in socioeconomic inequalities of all classes, social unrest and all forms of injustice, religious extremism including from the libra unknown agenda and from the ISIS, climatic change real or imagined, and so on. Yet America is the world’s  leader and where other nations are affected by the policies rolling out therein. The rest of the world may have no direct votes but we can make those who have the votes to be reasonable with their votes.

The odd ratio appears to favour the candidate with more controversies, Donald Trump, for two main reasons, the generation we are going through  and the Obama phenomenon in the world politics. This generation favours the youth and the celebrities. These are those who act, eat or dress the odd way, speaking boostfully, and with imaginations beyond the sky candidates. It is no longer for the candidates with royal resumes or from the established godfathers nor from the dictates of political parties. Those who still hang on to crossing all the T’s  and dotting every I are going to be wasting time in this computer-age generation. Hence even if a presidential candidate singlehandedly  carries a gun to deport every Nigerian in the US, or do anything to increase his publicity, just anything, his chances of success may improve. The Obama factor, a big rhetoric,  a great speech deliverer, an audience controller,  a sports manly  candidate, a big celebrity is also helping the Trump candidacy. No matter what lies a celebrity brings out the followers have been inducted.

The third is the gender factor and whether Trump’s multiple marriages or Mrs Clinton being a woman has a significant effect. The immediate answer is that such an effect is not significant either way. The woman we are talking about ought to by now be fighting the game for another younger woman, even her daughter. Imagine a grandmother having to stay overnight in the office 24/7 and travelling with that. It is true we have the 1st female candidate in her but she is not a new candidate. The public has always had her. Donald John Trump’s many failed marriages may not affect him because women don’t seem to like other women to lead them. Sociocultural instincts favour men leadership whereas we are campaign for even leadership. We have an opportunity to test this opinion using two old candidates; a 70-year old man with the less political experience and another 69-year old woman with all the needed political experience. The two candidates are not in short supplies when it comes to  talking, but one is more reserved than the other when it comes to hitting below the belt.

The rest of the world politicians may have to brace up and refusing to take any lesson from a campaign that promises to be rough and abusive. It is only in the United States of America that almost anything is possible. They can produce candidates that no one is prepared to vote for. Let us always campaign against voter’s apathy because refusing to vote can produce the wrong and the worst expectations. There is still a difference between two JAMB candidates that scored 30% and 31% respectively. We should always turn out and cast our votes. It our plea that  the United States of America electorates should turn out to vote in 2016 and choose the less dangerous candidate between Hillary Clinton and Donald Trump.