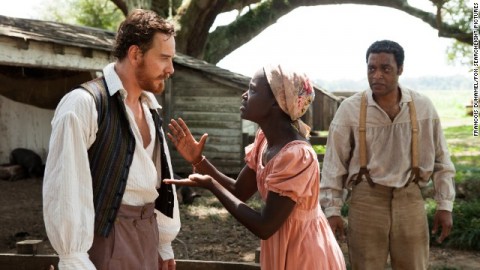 The searing drama “12 Years a Slave” was named best picture at the 86th Academy Awards on Sunday night. 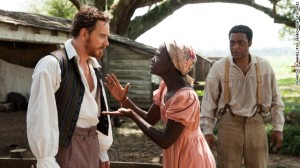 Scene at the film titled “12 years a slave”

The story of Solomon Northup, a free African-American man who was kidnapped and sold into slavery, won just three awards, but they were all major: best picture, best supporting actress (Lupita Nyong’o) and best adapted screenplay (John Ridley).

Brad Pitt, one of the film’s producers, accepted on behalf of the film before deferring to its director, a noticeably excited — and tongue-tied — Steve McQueen.

“Everyone deserves not just to survive, but to live. This is the most important legacy of Solomon Northup,” McQueen said.

He added, “This is for all the people who have endured slavery, and the 21 million people who still endure slavery today.”

Nyong’o, a newcomer, paid tribute to her character, Patsey, a slave in 1840s Louisiana. Her voice cracked as she spoke.

“It doesn’t escape me for one moment that so much joy in my life is because of so much pain in someone else’s,” she said.