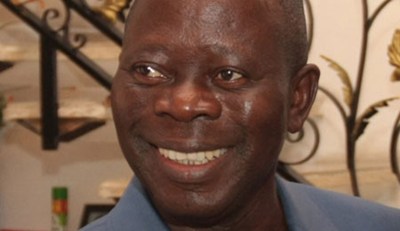 Favour came the way of Madam Joy Oviengbede Ifije, the widow whom Comrade Adams Oshiomhole of Edo state said she should “go and die” as the Comrade Governor splashes the sum of N2million on her on Monday. 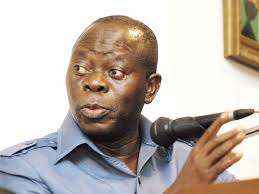 Last week, the Governor accused her of blocking the walkways along Mission Road with her goods and told her to “go and die”, the statement which has attracted criticism from the public.

The State government gave her N2million to rent a shop and set up a business in order not to sell along the highway again. Oshiomhole also gave scholarship to Bright Ifije, the son of the widow to further help the family.

At a breakfast meeting on Monday with the family of the widow, Governor Oshiomhole reiterated his earlier apology to the woman following his outburst at her, which he confessed was as a result of anger from the way traders and drivers are frustrating the state government’s efforts to beautify Benin City.

Oshiomole said: “my anger was that when I saw you blocking the road I said if you are blocking the road, do you want people to be killed and you said you are a widow and I said if you want other people to be killed. I am sure you know that we don’t want accidents on our roads and that was why we built the walk ways so that pedestrians will have their way and vehicles will have their way.

“I am doing my best to see that we make Benin City a beautiful city that it was before. You see, when you send a lot of money, government money to try and beautify the city, to build roads and all that, you find the roads are not working, I get very angry. The second issue is that when you put your goods on the roads, the buses can run into you or like those that sells tomatoes or pepper, those things can be contaminated because of the exposure which is not good.

“That was why I said to you if you are a widow, do you want more people to be widows, but when I said go and die, I was really touched that I said that to you because I understand that looking at you, you are struggling but I was really angry but I realized that even at anger I can achieve the same result without talking to you the way that I did.

“Though I apologize to you from the bottom of my heart because even my own daughters they have been harassing me on your behalf. I was really angry that day because I was going round and I found out that a lot of things were wrong and it was a pity that that anger, that aggression was transferred to you and I hope you forgive me” he stated.

He pleaded with the widow to “assist me to talk to traders first to keep our roads clean, not to block on roads so that people walking, people walking can have the roads free. The state government will employ you to do this job for us and we will give you all the assistance you need”

Madam Ifije was accompanied to Government House by her sister Patience Ajayi and the landlord, Mr Omobude Osakpanwa.