Oshiomhole to Nyiam: Your Shameful Outburst Exposes You As Biased Confab Member 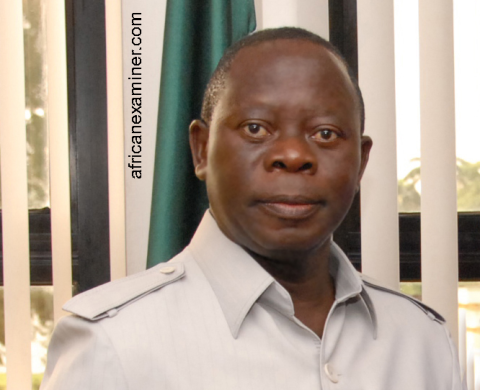 Edo State Governor, Comrade Adams Oshiomhole has taken the war of attrition between him and Col. Tony Nyiam, a member of the Presidential Advisory Committee on National Dialogue, to a combative level, saying Nyiam lacks respect for constituted authority.

The governor lamented that Nyiam’s unruly attitude and comportment during Committee’s sitting in Benin City, the Edo state capital, clearly demonstrated that he not only lacks respect for constituted authority but also his love for disunity. 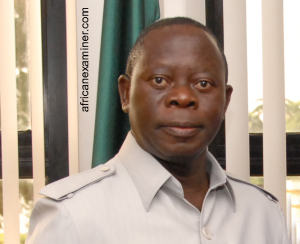 Nyiam had allegedly caused an embarrassing altercation during the Committee’s visit when he rudely interrupted the governor while he was addressing them, claiming that he was “talking down on people”.

He also noted Nyiam’s conduct deserves pity because, according to him, he might still be hallucinating, thinking he is an Army officer who must be obeyed, adding  that even while serving as an officer in highly disciplined profession as the Nigerian Army, he stood out like sore thumb and that his naked ambition for power led to the death of many officers and men who owned up and faced the sentence for their treason but he took to his heels rather than face the consequence for his action, like all cowards do.

“We recognize that no military officer worth his salt would openly disagree with a superior or a Governor at a forum such as the one in Benin City, but again, we recognize that the maxim “Officer and Gentleman” does not apply to Nyiam as he has once again displayed to the people in the open”, the governor said in statement signed by his Chief Press Secretary, Peter Okhiria.

The statement explained that Governor Oshiomhole was only expressing his opinion that the outcome of this conference will not be different from that of other conferences that the country had convened in the past.

“We wonder when airing one’s opinion now means talking down on the people. We wonder when Nyiam became the President’s spokesman as to want to drag the President’s name into his shameful act. We are however not surprised, going by his antecedents, the Benin incident was just another manifestation of his lack of respect for constituted authority and his love for disunity”, the statement added.

It further argued that the lame and odious response of Nyiam to his shameful action in Benin, where he fully exposed his hand as a biased member of a Committee which should be above political, ethnic and indeed other sentiments, was lamentable.

“We find it interesting that Nyiam has exposed the undercurrent motive of the conference which has also confirmed Governor Oshiomhole’s initial fears about viability, necessity and desirability of same. In-as-much as we believe that Nigeria is in dire straits, the governor still insists that a talkshop with no agenda is not necessary at this time”, the statement stressed.

Defending his attack on Oshiomhole, while speaking on the telephone with a journalist, Nyiam said the governor made ‘’sarcastic remarks’’ against the proposed national dialogue and  “talking down on people.”

Nyiam added that he felt Oshiomhole, after “lecturing” members of the dialogue advisory panel on his reasons for opposing the conference, during their visit to him in his office, came to the venue and started the same lecture.

“Governors who have penchant for insulting the President or making sarcastic remarks against the sense of judgment of the President of Nigeria should be ready to tolerate response from Nigerian citizens to tell them no. The committee’s role is advisory, we need to consult with the people to advise us and we will then synthesise the people’s opinion and use that to advise the President because we believe that we need to work towards a people’s-driven constitution which we never had in our history.

‘’We thought we should start a bottom-up approach from the grassroots to the top. The attitude was that there should be no talking down on the people we are supposed to engage the people not to talk down on them. Based on this principle, the key feature of our consultation was to meet with the people but out of courtesy we pay courtesy calls on the governors or the king in the city”, he further stated.

Continuing he said: “So when people started booing the governor, I went to the chairman to remind him about the rules of our committee. The chairman said we should give him a chance to continue. He carried on with his derogatory remarks and it was at that point I then said ‘no, not again’. When I said that, by this time, his aides tried to come at me, but when I suspected that one was at my back I stood up. I sat down throughout.”