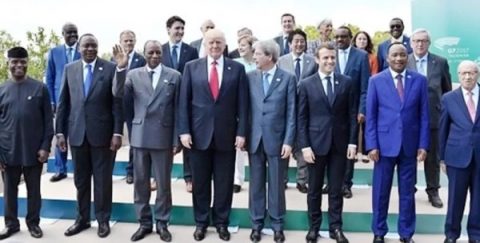 (AFRICAN EXAMINER) – Africa is undeterred by the failures of the past and the continent is motivated by the incredible energy and talent of its bustling youthful population, according to Acting President Yemi Osinbajo

According to him, “Africa is confident of the future because we have learnt,…we are investing more in education, insisting on good governance and holding ourselves to account.”

“But the greatest reason for our optimism is in the incredible energy, talent and creativity of our young people, male and female who are completely undeterred by the failures of the past and are daily taking advantage of innovation and technology bringing about the Africa of our dreams,” the Acting President stated.

While assuring the G7 countries of Africa’s increasing collaboration as never before in trade, counter terrorism and strengthening democracy, Prof Osinbajo commended the seven most industrialized nations of world for their support in the fight against Boko Haram terrorism, especially the US, France and the United Kingdom as effective partners in the Lake Chad basin, citing the successes of “our joint intelligence which has provided useful and timely intelligence in the war against terrorism.”

On the progress made so far in the country, Prof Osinbajo highlighted that there is massive increase in rice yield over the past two years, distribution of fertilizer subsidies to farmers, who have also benefited from an e-wallet system which guaranteed that the subsidies actually gets to the farmers.

Continuing, he  said the N-Power programme which has started engaging some of the up to five hundred thousand young previously unemployed graduates instalmentally as teachers, agricultural extension workers and public health professionals “is a breakthrough in mass post-tertiary education.”

He said the participants were recruited online in all states in the nation mostly using mobile phones, adding that participants were soon to receive their electronic tablet devices and can access an N-Power portal that contain required training materials for acquisition of more skills to carry out their duties.

The Acting President has since returned to Nigeria.