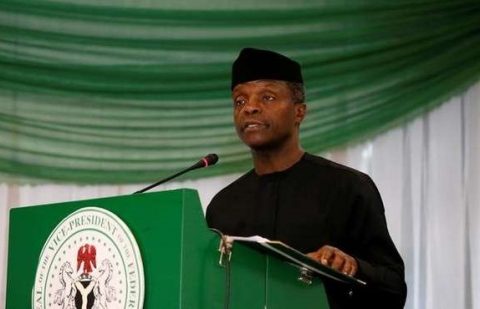 ABUJA, NIGERIA (AFRICAN EXAMINER) – The Federal Government has expressed reservation on ”hate speech” saying that the conduct will henceforth be considered as an act of ”terrorism”.

FG stressed that threat to the people via words or speech is now ”terrorism” therefore, would not be tolerated again by the present administration.

While restating that the matter would be given due attention, the Ag President specified that the FG has drawn a line against hate speech, insisting such ”will not be tolerated” and ”taken as an act of terrorism and all of the consequences will follow.”

Consequently, Prof. Osinbajo called on stakeholders such as business, political and religious leaders to condemn “in the strongest possible terms”, hate speeches which promote violence against an individual or a group, in particular,  when they are made by the people of the same religion faith, tribe or group.

“This is why I urge all political leaders, religious leaders, business leaders and all of those who truly want a united country, a country where there will be peace and security to ensure that we do not tolerate by our silence the hate speech that we hear every day in community” Prof Osinbajo maintained.

While restating the three core focus of President Muhammadu Buhari-led administration, which include: fighting of corruption; securing the country and reviving the economy, Osinbajo noted that hate speeches remain impediments in efforts to achieving the laudable goals in the country.