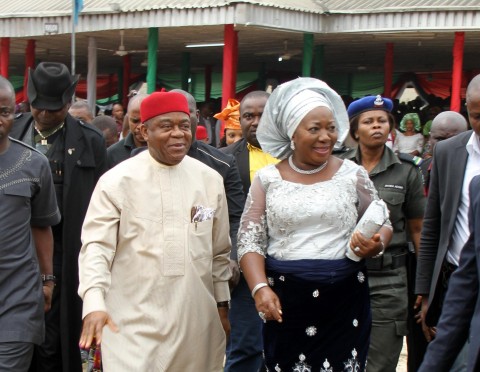 Chief Mrs. Odochi Orji, Osinulo Maranma is indisputably the first lady of Abia State by the strong implication that she is a better and spiritual half of Chief T.A. Orji Ochendo. Before her were six predecessor-ladies who occupied the position of the first lady, namely: Mrs Grace Ajobena-1991-92, Chinyere Onu-1992-93, Chinyere Ike Nwosu-93-94, Florence Ejoor-94-96, Rebecca Fasanya-96-98, Linda Obi-98-99 and Ifeoma Uzo Kalu, 99-2007. 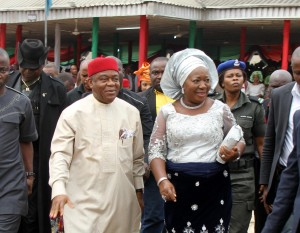 As you can see, these other women with due respect and every sense of responsibility had good names, charming looks, stable character and admirable personas. They did their personal best and as the man in the office allowed them in their era, but it is undeniably factual that never in the history of Abia have we had it so good from our first Ladies like it is today.

According to Martin Luther King junior, ‘life’s most persistent question is what are you doing for others?’ Mercy Odochi Orji has answered this question creditably and satisfactorily

It should be a lesson to all and sundry that her success in delivery of charitable largesse is due mostly to her determination to raise her kind, the women folk in particular, and serve humanity in general. It may even have been her vow and covenant with God when her husband was incarcerated and like Hannah in the bible vowed in her childless situation, Osinulo may have mused, if you get this man out of the valley and shadows of death, I will help the down trodden. This task and personal avowal are made more difficult when her office, as large and so demanding as it is, has no appropriation or contribution from the coffers of the Federal Republic of Nigeria like other first ladies, yet allowed by the constitution to play ceremonial roles. Her Excellency the Deborah of our time has not only taken up this challenge seriously but has bequeathed so much to so many in a gracious manner.

Her Excellency’s transformation from the innocent housewife to the indomitable social activist, politician, protector of the powerless and needy, play out like the following story.

A certain professional never imagined he could jump three feet let alone scale a wall. Just like the little boys in our numerous neighborhoods play their football in any space available, the one in question climbed over a neighbor’s fenced house to retrieve their stray ball, unaware that the absent neighbour’s dog would be free. The little boy confronted by the lion-like dog, had no choice than making an escape. Mustering all his efforts, he saw himself flying over the high wall and from that experience became a professional jumper. So it was for Her Excellency Chief Mrs. Mercy Orji who started playing her role from crisis when her lovely husband was detained for no crime of his, the first time he saw the inner walls of a cell. The detention was enough to frighten the guts out of any lion hearted.

This sounds like a story but an international experience, a historical one will to a large extent elucidate this fact. In The Long Walk to Freedom, Nelson Mandela’s autobiography, it was clearly narrated how Nelson’s first marriage crashed. Evelyn, Nelson Mandela’s first wife sued for divorce when she realized that Nelson’s freedom fighting and liberationist lifestyle was too precarious for her comfort and may keep him out of circulation and so she capitulated.

Luckily for Abia people and many whose lives Osinulo has transformed, she soldiered on, crushing the first most tedious challenge and has taken all other challenges as they emerge.

It is pertinent to know that, Osinulo synergized with men and women of good will, worked tirelessly before her husband was released.

Since then, she has not relented in fighting for the less privileged, physically challenged who she had given prosthesis, wheel chairs, crutches and children she has fostered. A little example will help. Her Abia Prayer Network, one of her first initiatives has proven to be the bedrock of her accomplishments, indicating that her staunch believe in the power of prayers has been rewarded greatly and many have benefitted.

She instituted her pet project ably titled Hannah May Foundations, properly registered and appropriately articled with a well constituted board of trustees. This has provided a powerful springboard for many philanthropic gestures that have cascaded down to Abians and non Abians alike.

A friend of mine and a member of the same age grade passed through a harrowing experience I would not pray to happen to any of my enemies. As we know, fire is a good servant but a terribly bad master. Mr Obike Ogwumike fell victim of this bad master’s fiery visitation. We got this bad news and in line with the activities of age grades in Eastern Nigeria since time immemorial, made spirited efforts to assist, but before we could say ho! Hannah May stopped us in our tracks and raised a palatial place for Obike.

Mrs Julie Ogbonna of Umuana Ndume, got herself a dashing 3 bedroom place, same for Mrs Best Ekeoba, a widow, of Obingwa who today savours the precincts of an accommodation, her four-bedroom flat, which would have only been a dream. This care of the needy and helpless, has no sex preferences just like the old man of Eziama Ubakala, Pa Barth Onukwue whose housing problem came to an end with her Excellency’s intervention. Oluchi Abraham of Okwuta Ibeku, Evangelist Eze Of Nkporo are all evidential cases. Today Young men and girls are being imbued with various skills in the three senatorial zones in Abia with varying skills and equipped superfluously to operate at graduation.

The widows enjoy many alleviation programs directly under the auspices of her Excellency’s office. She has schemed them into the Ochendo Youth Foundation Scheme where they have received free vehicles and other lifesaving gadgets. She has collaborated with organizations at home and abroad to unleash medical succour to all strata of society including screenings for breast cancer, free reading glasses, awareness for non-communicable diseases and a strong advocacy against child labour and smuggling, prostitution, juvenile pregnancies and baby factory syndication.

What more can we say or ask for rather than God’s protection of this large giver which the Koran acclaimed that ‘the hand that giveth is always on top. Abians rejoice!