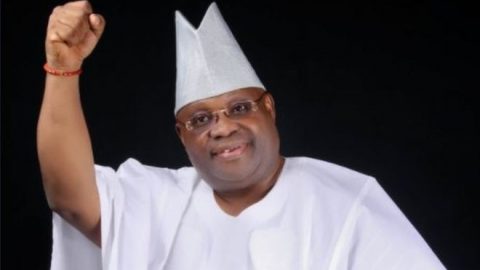 Adeleke won with a total of 154 votes to defeat his rival and candidate of the ruling All Progressives Congress (APC), Mr. Gboyega Oyetola at the Abogunde/Sagba ward 2, unit 9 in Ede as well as other candidates.

At the end of counting of votes, the People’s Democratic Party and its candidate, Ademola Adeleke, won the polling unit with 78 votes to the APC’s 49.

Earlier after casting his vote, APC candidate, Alhaji Gboyega Oyetola told journalists during interview that he was hopeful of winning the poll as he had laboured hard for the exalted position.

Meanwhile, a PDP agent has been arrested by security operatives for allegedly attempting to buy votes.

Reports said the agent had attempted to distribute money to woo voters at the Obada area of Ede in Ede Local Government Area, but that could not thrive as he was nabbed by the law enforcement officials.

Collation of the results is still underway at the various polling units in the 30 Local councils across the State.