Few days to the governorship election in Osun state, Governor Rauf Aregbesola has launched consultations with Islamic leaders across the three senatorial districts of the state. 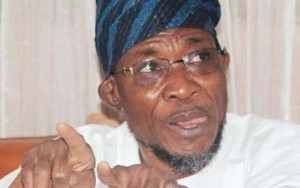 Reports from the encounters of the governor however indicated that many Islamic clerics in the state are not satisfied with the performance of the governor in the last four years.

Investigations showed that the meeting held at Osogbo with Islamic clerics from the Central zone ended in chaos as the governor was allegedly accused of idol worship by vocal clerics and of doing nothing for Muslims despite his earlier promises.

At the meeting held late in the night at the residence of a top Islamic leader, the Muslim leaders were said to have challenged the governor to mention one thing his administration did for Islam to justify their supporting him for the second term.

The governor was also accused of raising the profile of traditional religionists by declaring a public holiday for them and reflecting their symbols in state institutions .

The governor was quoted as telling the clerics that he did not favor the traditionalist but only provided a level playing field for all religions.

The explanation was said to have angered the clerics more as they used the governor’s argument to justify their allegations that he is not a true Muslim.

A young cleric was said to have asked the governor whether it was his job to have spent thirty million naira to build a stature of Ori Olokun at a junction at Ile Ife and another ninety million naira to rehabilitate the Ifa house also in the same town.

At this point, the meeting was reportedly brought to an abrupt close with the governor storming out of the meeting, an eye witness recounted.

If the meeting at the central zone was turbulent and deadlocked that of Osun West held at Iwo was even reportedly more hot and heated with the governor and his men begging the clerics to support the second term aspiration of the governor.

An eyewitness account reported that the meeting started with the governor warning that the PDP is plotting to destroy educational progress of Muslims students by deliberately failing them and by returning schools to missionaries.

“He told us the clerics that Islam will be in danger in Osun if PDP wins. He said something about schools going back to owners among others. When they asked us to respond,we reminded them that Islam had good time during PDP regime and that we see no evidence that the PDP is against Muslims .

“We then asked him to explain why in the last  four years he had promoted one small body  over all established Muslims sect and associations. We asked him why he is so close to traditional worshippers. We asked him what exactly he has contributed to Islam “, an eye witness recounted.

The governor surprised at the line of questioning was quoted as telling the clerics that he contributed to Islam by his dress and wearing of beard. He also warned the clerics not to be swayed by PDP propaganda.

The clerics said to be very bold in their interactions with the governor responded by telling the governor that his policies have not assisted Islam but rather created image problem for the religion.

A state commissioner was then reported to have intervened by directly begging the clerics to support the reelection bid of the governor and promising that all grievances of the clerics will be looked into.

Checks revealed that consultations for Osun East was put on hold because of negative experience in both central and western senatorial districts .

According to him,” we met the governor . He failed to explain his romance with traditionalists. He failed to point to anything he did to help Islam. His bid to blackmail PDP as anti- Islam backfired because we know PDP is not anti- Islam.

“The truth is the governor did not behave like a Muslim. So we are thinking he should not use Islam as a cover to get power. That is why the meetings failed “, the cleric said.