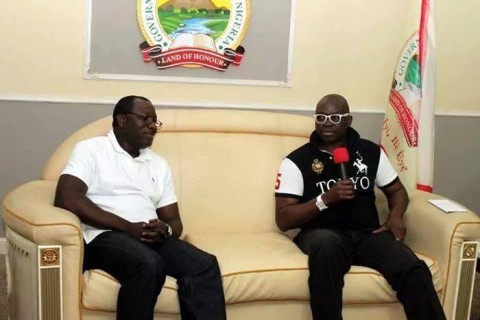 The outgoing Governor of Ekiti, Dr. Kayode Fayemi has pledged to work out and plan a smooth transition programme with the Governor-Elect, Ayodele Fayose.

He said with the result of the election, the people of Ekiti have spoken and he did not have choice than to respect and bow to the wish of the people.

Fayemi reiterated that his administration has done creditably well and has set a standard and strong footing in which the incoming and subsequent administration of the State would stride.

The Governor-Elect, Fayose who visited Fayemi in his office today described Ekiti as a peaceful and “homogenous” entity. Fayose in his response to the out-going Governor’s speech pointed out that four years was a very short time in the life of an administration.

Fayose also former Governor of the state, indicated his visit was to express resolve to work with his co-contestants and ensure peace to reign. He declared for him, there was no winner, nor loser in the just concluded gubernatorial election in which he polled over 200,000 votes on Saturday, 21 across the 16 local councils of the state.