Over 7,000 PDP Members Decamp To APC in Rivers 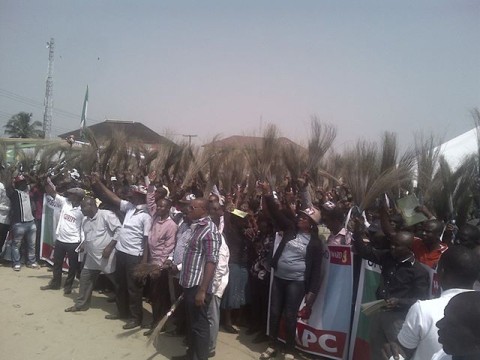 The gale of defections from the People’s Democratic Party (PDP) to the All Progressives Congress (APC) across Rivers State took a frightening dimension on Thursday as virtually the entire populations of Opobo and Nkoro gathered at the Primary School field, Opobo Town with their symbolic brooms and declared their switch over from PDP to the APC. 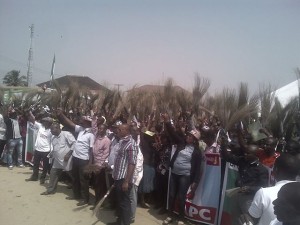 As early 9 am, the Primary School field, Opobo Town had been adorned with canopies and various decorations. In less than an hour, the canopies had been filled by indigenes of Opobo and Nkoro representing the various strata of the society such as traditional chiefs, professionals, politicians, and the general populace.

By the time the event kicked off at noon, it had become obvious that the field could hardly hold the surging population growing by the minutes. As the crowed surged, holding their symbolic broom of the APC, traditional drumming rented the air from the stands of the 11 wards that make up the LGA.

After the national anthem and introduction of dignitaries, first to set the ball rolling was the Executive Chairman of Opobo/Nkoro Council, Hon. Maclean Uranta. He said that the decision of the people of the LGA to move en mass to APC was as a result of PDP betrayal and high-handedness. Uranta declared that the people of the LGA are grateful to the governor of Rivers State for the giant developmental strides he has established all over the LGA.

“The governor has brought us developments at every sphere of life. Today over 15 of our sons and daughters are in schools abroad studying in many disciplines; the governor has put in place real development that the eye can see across our LGA,” Hon. Uranta stated.

Other dignitaries who spoke at the occasion include the member, representing the Andoni/Opobo/Nkoro Federal Constituency at the House of Representatives, Amaopusenibo(Hon) Dakuku Adol Peterside. In his speech, the MP catalogued the indignities, mischief and undemocratic actions of the PDP towards the state chief executive and prominent sons of the area.

“I am convinced that you have gathered here out of your own volition to join the APC in support of your darling governor, Rt. Hon. Chibuike Rotimi Amaechi who has made it possible today for Nkoro people to drive home in tha past 2 years; I believe that you are moving with the governor to the APC because you see the schools, hospitals, sand filling, shore protection project at Queens Town and Kalama and other developmental projects across the LGA,” the lawmaker declared.

Others who took turns to speak at the occasion include the former deputy national chairman of the PDP who is now a member of APC, Gbalolo (Dr.) Sam Sam Jaja, the Commissioner in the Rivers State Local Government Service Commission, Amaopusenibo (Engr) Idatonye Accra Jaja, the Sole Administrator of Greater Port Harcourt Development Authority, Dame Aleruchi Cookey-Gam, amongst others.

However, the highlight of the occasion was the speech and handing over of the APC flags to each ward through their councillors by the interim State Exco Chairman of the APC, Chief (Dr.) Davies Ibiamu Ikanya (JP).

Chief Ikanya, who was joined by other state interim exco members on the stage, electrified the audience with his speech, likening the movement to APC to the abandoning of a bad vehicle (PDP) to join a sound vehicle (APC) in order to successfully complete the journey. He thanked the people of Opobo/Nkoro for their unanimous decision to join the APC en mass in line with the decision of their leaders and the state governor, Rt. Hon. Chibuike Rotimi Amaechi.

The arrival of the governor (represented by the deputy governor, Engr Tele Ikuru) further activated the audience who became almost uncontrollable. As he climbed the stage to speak, intermittent applause rented the air. Ikuru thanked the people for their support for the governor as shown by their collective decision to follow him to the APC. He enjoined all to support and work for the success of the APC in future elections.

“By moving over to the APC, you are demonstrating your belief in your leaders because you trust them. I thank you all and urge you to continue to remain steadfast as we change our vehicle in order to get to our destination,” the deputy governor said.

A member of the Rivers State Executive Council, Mr. Chamberlain Peterside (Hon. Commissioner for Finance) who is also an indigene of Opobo was in attendance amongst other dignitaries from across the state.