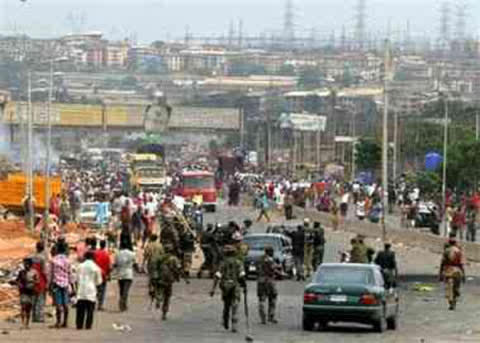 The LASU-Iyana Oba axis in Ojo local government area of Lagos State is presently in pandemonium and confusion as a team of policemen some minutes ago, are allegedly shooting after causing an accident in the ever busy area.

According to a tweet to the studio of a Lagos based radio few minutes ago and monitored by African Examiner, the policemen engaged in the shooting perhaps after the havocs in the cause of the reported accident, to scare the residents and passersby away, to avoid being prevailed upon by the mobs.

Sequel to this, motorists have been advised to hold plying the axis in the main time or divert to another possible alternative routes, in order avert being caught in the web of the rowdiness.

Police in most parts of the Lagos are reputed for overzealousness on the road while dealing with commercial bus drivers and other road users.

African Examiner could not confirmed the level of causality in the escalation as at the time filling this report.