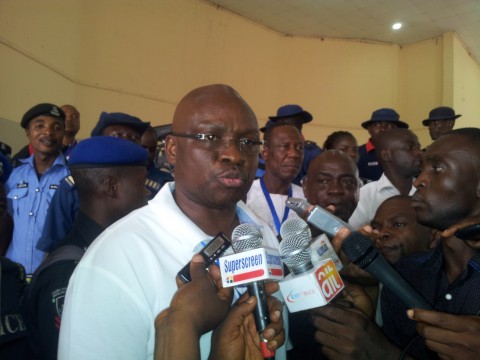 BALTIMORE, MD (AFRICAN EXAMINER) – The Ekiti State workers on Sunday asked Governor Ayodele Fayose to shelve his solidarity strike he declared on Friday in honour of the striking workers, saying what we want is our money to alleviate our poverty and not his solidarity strike.

Fayose, had on Friday declared that he had placed himself on indefinite strike in solidarity with the workers, who had been on industrial action for about two weeks over non-payment of five months outstanding salaries.

Fayose said it has always been his wish to respond to payment swiftly, but for dwindling revenue to the state, adding that “now that I share from your pains, I have also placed myself on indefinite strike in solidarity with you and I shall be waiting here for you until you call off”, he said.

But organized labour in Ekiti State, who, however, commended the governor for declaring solidarity strike, maintained that what the workers needed is at least payment of three months salaries to actually authenticate the sincerity of the self-imposed strike declared by Fayose.

The Chairman of the Trade Union Congress in the State, Com. Odunayo Adesoye, who spoke with newsmen in Ado Ekiti, stated that the level of poverty among the civil servants has become burdensome and unbearable
to the extent that they have become beggars.

“We appreciate the governor for sharing from our pains and anguish. But the workers will appreciate and commend him the more if he can pay at least two or three months salaries out of five months owed.

“Our situation has gone beyond the governor declaring mere solidarity strike. We need more of actions now than talks because our situation is gradually becoming hopeless.

“Some of us have the intention of going to work, but no money to pay for transport fare. Some of us could not take two square meals a day. Some could not cook soup with ordinary fish, so our situation has gone beyond what anyone could trivialize.

“But I want to say that we are resolute to fight on, because it is an issue that borders on our welfare, careers and prosperity.

“We are hearing that the federal government want to give grants to states, so if Mr Governor could pay three months now, it will be easy to use the grant to pay the remaining two months and still help in paying for the subsequent months.

“We appeal to the workers to be law abiding. We want them to be civil, even in the face of provocation. By the grace of God, we shall all rejoice in the end”, he said.