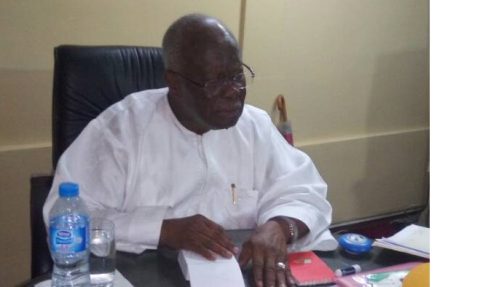 …Vows to Uphold Justice, Fairness, Equity in the Party if Elected

He noted that the call  was aberration even as he described the group as  fake and faceless. Chief George who is contesting for the PDP national chairmanship position stated this on Tuesday in his Ikoyi campaign office in an exclusive interview with AFRICAN EXAMINER.

It would be recalled that a member of the party in Osun State South West Nigeria, Mr. Hakeem Ogunsola last Sunday, in a statement declared that it would back a former National Vice Chairman (South South) of the PDP, Prince Uche Secondus and urged the aspirants from the South West to jettison their ambition, saying the zone was not the base of the PDP.

However, the former Chairman of the Nigeria Port Authority (NPA) maintained that the group was a mere ”characterization”, wondering how can one abandon his own house and begin to look for a foreign abode.

He insisted that the group was faceless, and challenged if it is real, the members should come out and show their faces.

Chief George stressed ”If they are thorough-bred Oodua, they cannot make such comment”, adding that as the Aatona Oodua – (the Pathfinder of the Progenitor); he considered such story as one denying his origin a treasure or fortune.

The prominent PDP stalwart asserted that those behind the call lacked the knowledge of the Nigerian and PDP politics; as well as the goal of the party, its Leaders and the country.

The call, Chief George insisted was a ”misinformation” and a clear contradiction to the resolution reached at a meeting of all Southern Leaders of the former ruling party, which held in Port Harcourt, the Rivers State capital in 2016, which he recalled resolved that the PDP National Chairmanship should be zoned to the South West geo-political zone.

The former National Vice Chairman further admonished that the party was bigger than individuals; therefore, appealed that no member should in the name of politics, rescind the enviable legacies labored for, and built by the living and late founding fathers of the party.

Chief George who said he has served for 10 years in the National Working Committee (NWC) of the PDP declared that the former ruling party in its present critical state could not afford ”experimentation and trial” at the leadership level.

While speaking on what he will do differently when elected into the office, the former Military Administrator of old Ondo State reiterated that he would work on how to check the raging immunity within the the ranks and file of the PDP.

The aspirant said he would also ensure that justice; fairness and equity are maintained within the party and ultimately, make sure that the members, with intellect, financial muscle and ‘unrepentant’ loyalty are united.

The Ahmed Makarfi-led National Caretaker Committee of the PDP has fixed December 2017 for the elective National Convention.