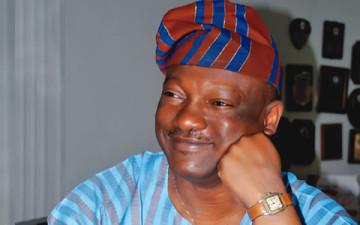 LAGOS, NIGERIA (AFRICAN EXAMINER) – A prominent chieftain of the Lagos State opposition Peoples Democratic Party (PDP) Mr. Jimi Agbaje has confirmed that he is re-contesting for the State’s Governorship seat.

Agbaje made the confirmation Wednesday via a telephone during an interview with the (NAN) in Lagos.

“It is true that initially I did not want to re-contest, but I had so many people urging me to run.

“I bought and submitted my nomination form shortly before it closed. I will be part of the PDP Lagos governorship primaries, billed for Friday, September 28, 2018“ he said.

Agbaje indicated that he was confident he would win the elections in Lagos, if he picked the PDP guber ticket to run.

On the upcoming primaries, Agbaje said he was confident that the leadership would create a level playing ground for all the aspirants, as has been the norm of the party.

“Our primaries have always been open, fair and free for all.

“This is what we are known for, and that is the way I expect it to be,” he said.

Agbaje, who also contested for the National Chairmanship of the PDP in 2017, won by the incumbent Prince Uche Secondus, said the recent defections from the party in the state would not affect him if he picked the ticket.

“It is the people of Lagos State that will decide. The issues in the party will not impart negatively on votes.

“Most Nigerians now vote for individuals rather than party,” Agbaje noted.

Mr. Agabje popularly known as JK, is a Pharmacist and the second born and first male child of five children (two female and two male siblings) including Segun Agbaje, the CEO of Guarantee Trust Bank. (NAN)