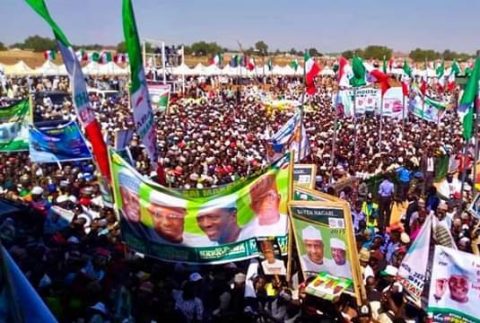 (AFRICAN EXAMINER) –  The People’s Democratic Party (PDP) has said that the crowd of supporters who received its presidential candidate, Atiku Abubakar in the North-West on Monday indicated that Nigerians would vote him as the next president.

The Presidential Campaign Council of the party disclosed this in a statement issued by its Director, Media and Publicity, Kola Ologbondiyan in Abuja.

Ologbondiyan commended the courage and show of patriotism by the people of the North-West to support Abubakar and for keeping with the collective quest to unify Nigeria.

He said that Abubakar’s acceptance by the region at the zonal rally in Sokoto further established the common feeling that he had the practical solutions to Nigeria’s challenges.

He described the crowd as massive and an expression of confidence in Abubakar’s proven pro-poor stance and his standing affinity with the down-trodden.

He added that the reception was an acknowledgement of his competence, capacity and political will to revamp the economy.

He urged the people of the North-West and Nigerians in general to continue to stand in unity in their resolution to vote for  Abubakar as the next president. (NAN)