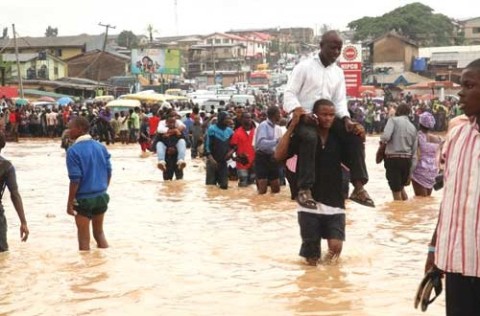 Ten people have been reportedly drowned during heavy downpour in Apete area of Ibadan, the Oyo State capital, South Western Nigeria on Saturday. According to Vanguard source, the victims were struggling to vacate their submerge buildings through make-shift bridge when they reportedly plunged into the flood.

The source claimed he was in the rescue team that tried to save the drowning people, pointing out that since the heavy downpour began in the past few days, flood had taken over major parts of the city.

“It was around 6.30 pm (Saturday) that it happened, we just heard cries of people who fell into the river (flood) and I decided to join the rescue team and we eventually succeeded in rescuing about six people while not less than 10 people were washed away,” an eyewitness revealed.