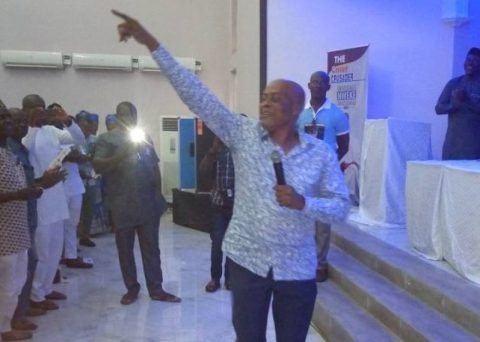 (AFRICAN EXAMINER) – A body with political, economic and social expedition under the platform of “the Crusader” has been inaugurated in the 81 wards of Enugu West senatorial district of Enugu state, South – East Nigeria, with the aim of  re-awakening the political consciousness of the grassroot people of the area and state in general.

Speaking Wednesday in Enugu during its official inauguration, founder of the group, and veteran politician in the state, Chief Gbazueagu Nweke Gbazueagu, fondly known as (GNG), described the development as a new dawn in Enugu West senatorial district.

He stated that the Crusader movement is a political, economic, and social expedition born out of the desire of the leader, and founder, Chief Gbazueagu (GNG) to effect a genuine and equitable participation within the political and economic spheres in Enugu west district and beyond.

According to him, “political considerations, economic and social circumstances of Enugu state are the three major goals of this movement.

Chief Gbazueagu, a onetime governorship candidate in the old Enugu  state, under the banner of the defunct Social Democratic party of Nigeria SDP, added that “Crusader is also a pressure group that aims at mobilizing and re- awakening the latent potentials of the grassroots for full participation in the politics of Enugu West and Enugu state in general.

The Veteran politician, further hinted that its membership will cut across, as it would accommodate all political, social  and economic tendencies amongst the people of the state.

He said: “the Crusader movement will in all reality, return power to the people by making sure that political participations and elective positions will be achieved by those who are willing to be servants of the people and not just leaders

The social needs of its members he assured, would always be the organization’s priority, stressing that their economic empowerment will equally remained her major objective.

“My fellow Crusader members of Enugu West, as we formally inaugurate this movement today, may I intimate you of the on- going membership drive in all the wards of the other two senatorial zones of Enugu state, to be inaugurated in due course.

Chief Gbazueagu, had also made it clear that the organization was not a political party, but would be disposed to support any credible candidate during elections, irrespective of party affiliation, averring that the group will ensure that such individual if elected, is accountable to the electorate who gave him the mandate to serve.

He posited that it would no longer be business as usual, insisting that those given mandate to serve the people in any capacity must begin to imbibe the culture of rendering account of stewardship to the people.

African Examiner reports that speakers at the colourful event, including former commissioners, chieftain of political parties, youths, women, among others, had applauded the initiator, describing him as a trusted leader with vast experience in Enugu and Nigerian politics.