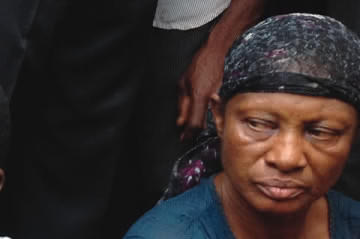 The suspect, according to the police, has been on the wanted list of various security agencies.

She was apprehended in Akwa Ibom state where she has been hiding.

Abia state Commissioner of police, Mr. Joshak Habila, who Paraded the suspect at the Officers Mess, Umuahia, described Achumba as Abia’s most wanted child trafficker, that had evaded arrest for over five years.

African Examiner recalled that Achumba, whose illegal maternity home at Umunkpeyi in Isialangwa South council area of Abia state, had been raided several times by security agencies has been linked with many child trafficking incidents.

Besides, a secret baby factory which was being operated by her son at a remote community in Olokoro, Umuahia South was in 2014, demolished by the state government, which also proscribed all maternity homes in the state as part of measures to clamp down on baby factory menace in the state.

Commissioner Habila, disclosed that one Ogechi Kalu ,from Ebonyi State had reported that a couple she was living with conspired and sold her six-month old baby boy to the suspect for N150,000.

According to the CP, the sold baby was later recovered from an old woman at Umunkpeyi while the suspect fled, but was trailed to Akwa Ibom by detectives of the State’s Criminal Investigative Department .

Kalu, whose baby was sold told newsmen, that the couple, Mr. and Mrs. Uchenna John, who employed her as house help conspired and sold her baby, Chisom, to the suspect.

According to her, the couple had told her that they were going to enrol the baby in a day-care centre and later returned to the house with bundles of money.

Kalu said she suspected foul play when her baby’s whereabouts became an object of controversy, a development that made her raise the alarm.

“I saw them counting a huge sum of money, and they told me my baby was in school but I became afraid and started crying,” she said.

But the couple said they had no intention of selling the baby but only enrolled her in the maternity home to enable the mother who was their maid to return to school.