Police Arrest, Beat up Suspect Within Court Premises in Lagos 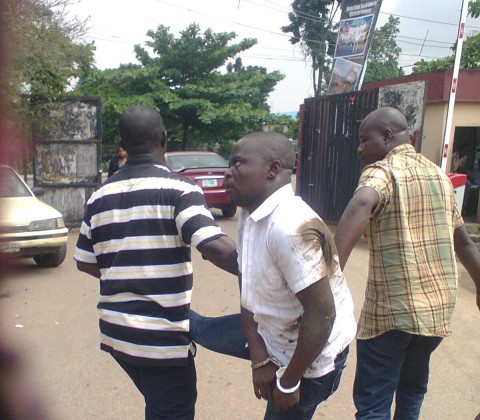 Ruth Bamidele, Lagos
Drama ensued on Tuesday at the Ikeja Magistrate Court, as policemen were seen beating up a suspect within the court premises. 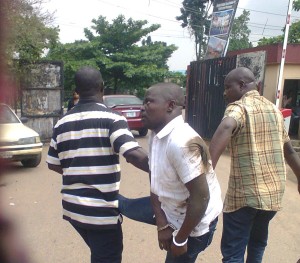 The suspect Akinade Kamila, a diesel dealer is allegedly owing a business partner a sum of N1 million, being money given to him to buy black market diesel in Warri, Delta State. When the diesel was been transported to Lagos, it was confiscated by policemen.

Babalola Wale, a friend of the suspect told African Examiner that the sum of N1million became a bad debt and the suspect was arrested and was latter granted bail by the policemen at the sum of N15,000 and provided a surety named Sulaiman Ola who also paid N200,000 out of the
debt.

Legal counsel to the suspect, Bar. Olufowobi Adeniyi, further revealed that the policemen on the 19th of September asked the suspect to bring his car to the police station which was impounded as a collateral for the money he is owing.

Olufowobi said he has been going about to make sure his client get back his car, as the car is the means of his client’s livelihood, since his client has lost all his money to the diesel that
was confiscated.

The suspect’s surety was, however, arrested and detained on Sunday, November 10 and was supposed to appear at the Magistrate court Tuesday, November 12 for his bail application.

The suspect who was said to have been at large, was sighted by the surety’s relatives and informed policemen, which led to his been arrested and beaten within the court premises.

The suspect’s legal counsel, Bar. Olufowobi said the actions of the policemen violate the fundamental human right of his client.