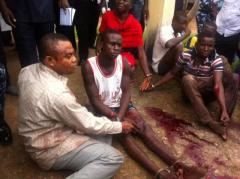 The police in Imo state on Thursday nabbed two students of the Federal University of Technology (FUTO) Owerri, for their alleged involvement in armed robbery and kidnapping.

They met their waterloo following  a tip-off by one , Joy Oparaugo (female) who alerted the police that the two suspects used an unknown phone numbers to call her, demanding the sum of  N400,000 in her custody, being the proceed realised from the recent wedding  ceremony of her girl friend.

The suspects, according to Oparaugo, had ordered her to bring the whole money to a place called bush lodge at Nekede in  Owerri West council area of Imo state,  adding that they threatened to either kill or kidnap her if she failed to comply.

Parading the hoodlums alongside other suspects arrested for various crimes in Owerri, the Imo state Commissioner of Police- Abdulmajid Ali said upon the receipt of the information, the command’s Scorpion Squad traced the location of the caller, and blocked all the exit routes.

According to Abdulmajid, the victim, then called the number that she had  brought the money and the two suspects subsequently emerged to collect the bag of money and were immediately arrested, searched and the callers phone recovered with same sim number used in threatening the  victim.

The Imo state police boss also listed five other notorious suspects, whom, according to him, were syndicates that have been terrorising Orlu, Orsu, Oguta and Isu councils areas in recent times.

The suspects he said, were arrested on April 22, 2014 at Njaba after they kidnap  one  Agara Wilson aged 30, from Amurie-Omanze, in the Isu council of the state.

He disclosed that the victim, was abducted with his Toyota Corolla 2005 model at Isu and was kept in the kinappers den for two days before he was rescued just as the suspects had been  identified by the victim.