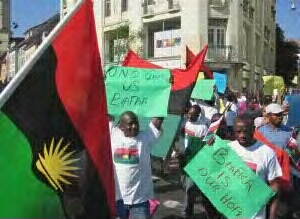 African Examiner reports that the group had two weeks ago, claimed responsibility of the early hour attack of Enugu state government House on 8th  (March) 2014.

Besides,  BZM had also threatened to invade other government Houses in the south east geo political zone to hoist the Biafran flags.

The state police public Relations officer PPRO, Ebere Amarizu, who disclosed this on Monday in a press statement made available to African Examiner in Enugu, said  “Onwuka Bejamin Igwe is one of the suspected actors in the unlawful act of 8/3/14 at Government House and since then has not been seen

“He is 5ft 2 inches tall and not too dark in complexion and about 52 years and speaks English and Ibo languages fluently.

According to the statement, the suspect,  is also a native of Item in Bende local Government Area of Abia state and is resident around Abakpa Nike axis of Enugu state.

“The command requests any one with useful information about him Onwuka Benjamin Igwe to contact any nearest police Division or formation or the state criminal and investigations Department Enugu state for appropriate action as the informant will be adequately rewarded.” It promised.

The PPRO, stated that the command has commenced full investigations into the alleged Enugu attack”   “Some arrests have been made to that effect and suspects already helping the police in their investigations to unravel all those behind the dastardly act, and bring them to book, while manhunt on the fleeing persons are in top gear”.