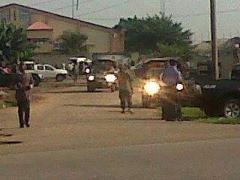 Tension and fear gripped residents of Owerri, the Imo state capital, following the discovering of bombs allegedly planted by unknown person in the premises of Living Faith Church (aka Winners Chapel), located along the Owerri-Port Harcourt road Sunday.

Some members of the church who spoke to our correspondent on condition of anonymity claimed that one of the bombs went off at about 6am, before worshipers got to the church.

They said there were up to six bombs, all of which were allegedly primed to go off at about 8am when the church would have been filled to capacity, “but for some reason, one of the bombs went off much earlier.

“There was a bomb blast in our church this morning, and so the church has relocated temporarily to Hero’s square; that is where we’re having today’s service.

“The explosion occurred around 6am when nobody was inside the church. When security agents got there they now saw about five more bombs that were set to explode at about 8am. We don’t know how that other one managed to explode before the others,” a woman said.

But when contacted, the Imo state police public Relations officer PPRO Andrew Enwerem, who confirmed the story, said  it was the police that detonated the bomb,” it didn’t go off on its own as claimed by members of the church.

His words: “The police deliberately detonated an object that was suspected to be an Improvised IED Explosive Device at Winners Chapel.

“The discovery was made last night by security men at the Winners church who were very alert. When they saw (an abandoned) hand bag around the church’s gate they quickly alerted the police

“The police bomb experts quickly moved in and discovered the explosive and deliberately detonated it before it could cause any harm.

According to the PPRO, “During their check, it was discovered that Improvised Explosive Devices in forms of refrigerator compressor concealed in sack bags were discovered,”

“One was promptly detonated at the scene because it was on a timer.

“The other one was dis-alarmed and then taken away for detonation.”

“We’ve gone on air to alert other churches and other densely populated areas to be on the look for such suspected objects and quickly alert the police.”

The state police spokesman, added that investigation has begun into the incident,just as he disclosed that six persons have so far been arrested for interrogation on the incident.

“They were arrested because we believe we might be able to obtain information that could lead to the arrest of the perpetrators from them,”

“The police believe the explosives were planted on Saturday night and timed to explode after worshippers had gathered for worship on Sunday.

Meanwhile, the state police commissioner, Mr. Abdumajid  Ali, had while briefing journalists at the church premises said the command would do everything possible to unravel the perpetrators of the act.

He urged the people to go about their normal activities as the two IEDs have been detonated.

Also speaking,  to newsmen,Brigade Commander, 34 Artillery Brigade, Owerri, Brig.-Gen. Lanre Bello, confirmed that the explosives were capable of killing many people at a time.

Worshippers at the church were full of thanks to God for sparing their lives.