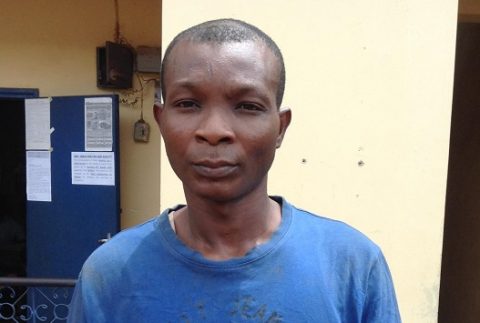 According to the state police public Relations officer PPRO, Ebere Amarizu who disclosed this to African Examiner on Friday in Enugu, the suspect was arrested on “26/8/16 following intelligence information concerning his alleged criminal activities.

“The suspect has been presenting himself as an officer before he was nabbed.”

“Upon his arrest, search was conducted, and a letter written by the suspect which he allegedly signed as a Brigadier General which he uses to wreak havoc on unsuspecting members of the public was recovered from him.”

Amarizu added that the police equally recovered other undisclosed items believed to be that of the military from the suspect.

“He is now helping the operatives of the state criminal intelligence and investigations Department of the command in their investigation.

Meanwhile, the Suspect has pleaded for forgiveness, confessing that “I have never been an officer, let alone a Brigadier- General, but a one-time artisan in one of the Army formations.