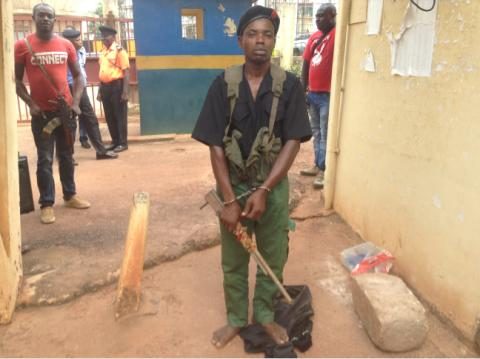 ENUGU, NIGERIA (AFRICAN EXAMINER) – Operatives of the Anti- cult Unit of the Enugu State Police Command has nabbed one Udoh Samuel from Ubiagan Ikono council Area of Akwa Ibom State, for impersonating as a police officer.

According to the state Police Public Relations Officer (PPRO), Ebere Amarizu, who disclosed this to AFRICAN EXAMINER weekend in Enugu, said the suspect, who resides at No 119 Amokwu street Ugbohe Abakpa, was picked on November 3, 2016 through intelligence information.

He said, “the suspect has been presenting himself as a member of the force within Ugboghe Abakpa and its environs.

“Further information about the suspect revealed that he doubles as a tricyclist” Amarizu added.

“Recovered from the suspects is a metal fabricated in gun like manner which he uses.

The Command spokesman said the Deputy Commissioner of Police (DCP), Okponkpong Imaikop, who is currently in charge of the state, following the recent retirement of the former commissioner, Mr. Emmanuel Ojukwu,”has already directed for a full scale investigations into the matter.

Said Amarizu: “the DCP, has warned that the command will stop at nothing at ensuring that criminal elements are flushed out in the state, and be made to face the full weight of the law.