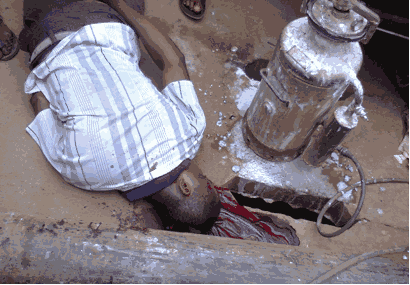 Police operatives attached to the Uwani division of the  Enugu state command Wednesday arrested four notorious  armed robbery suspects that have been terrorising residents of Uwani and  environs, particularly Mary Land axis of the area. 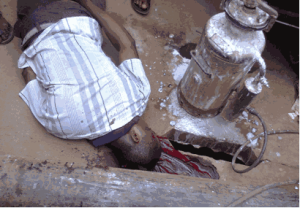 One of the suspected robbers

The hoodlums according to the police, had for a long time been on the wanted list of the operatives over their nefarious activities such as armed robbery, car snatching, amongst other crimes.

The suspects, who gave their names as Arinze Ede alias Ali Harm,Victor Odoemenam, Okechukwu Ude and Ikechukwu Amadi were nabbed at Mary Land axis of Uwani, in the Enugu metropolis.

Disclosing this to African Examiner in Enugu, the state police public Relations Officer PPRO,  Ebere Amarizu DSP, said the arrest followed the raiding of their hideout by men of the Command’s operation eagle-eye.

Recovered from the suspects, according to the PPRO, were two double barrel locally made pistols loaded with three live cartridges, a nylon bag of weeds suspected to be indian hemp, the sum of N21,650, a matchet, four suspected stolen phones of various brands, two DVD and video machines suspected to have been stolen in one of their operations.

He said full scale investigation has commenced into the incident.

Meanwhile the state Commissioner of Police, Adamu Abubakar Mohammed has applauded the efforts of his operatives who have been on their toes to ensure that the yuletide is celebrated in the state under a crime free environment.

Adamu however, called on residents of the state to continue to partner with the state command especially in the area of timely and useful information in order to further flush out hoodlums in the state.

The Commissioner, had used the occasion to warn sellers and users of fireworks, bangers and other explosives to  desist from it, as noise often produced by knock out as well as fireworks could be confusing to security operatives, and could also cause fire outbreak when it is thrown to an inflammable area.