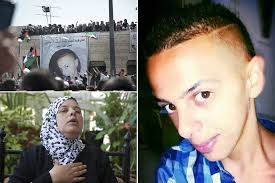 Israeli Police have arrested six Jewish suspects over the murder last week of a Palestinian teenager, Mohammad Abu Khdair, whose death resulted to days of violent protests. Police source indicated the victim was murdered “because of his nationality”.

Following the killing, hundreds of Palestinian youths went on rampage and clashed with Israeli police in East Jerusalem before and after the funeral.

A Palestinian-American teenager and cousin of the late teenager, Tariq Khdair, was one of those entangled with the Police but held after the clashes.

On Sunday, a judge ordered the suspect be held under a house arrest for nine days while the investigation lasts.

Israeli Prime Minister, Benjamen Nentayau, penultimate the week, condemned the teen murder, vowing that the perpetrators would be found and punished. He was also quoted Sunday as saying the country would act calmly and responsibly in the face of raging Israeli – Palestinian hostilities and faceoff.