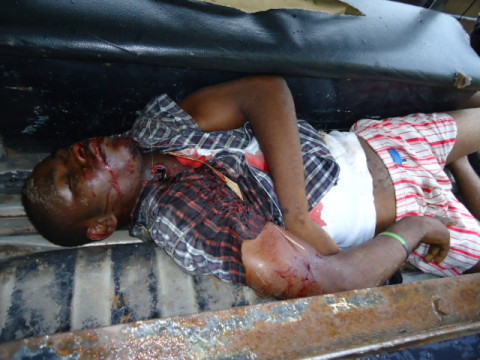 ..Kill one, others escape with gunshot wounds

A five man Kidnap gang that have be terrorising residents of Abia state, and environ on Monday met their waterloo, as  Policemen from the Aba Area Command, of the state gunned down one of them while four others escaped with various degrees of bullet wounds at the popular Ama Ogbonna axis of the  commercial city.
Our Correspondent gathered that the hoodlums, were said to have threatened a Pastor of one of the pentecostal churches, Mr. Samuel Origa to produce his son, Kelvin Origa who just returned from China or risk been murdered.

After the threat, the kidnappers went further to  trailed the clergy man to his house, where they insisted that he must produce the son Kelvin to settle them or they will wreak havoc in the entire family.

Narrating his ordeal to newsmen,Pastor Origa said the kidnappers first accosted him at Eziukwu by Jubillee road junction Aba, on his way back from a trip to Imo state.

Hear him “I alighted from a tricycle and four able bodied men accosted me with a rifle and collected my hand bag containing a cash of N270,000, mobile phone, documents and other items. They trailed me to my house and surrendered everybody at gunpoint.

“I pleaded with them, and we agreed that they should come tomorrow to collect N1m. I informed the police at the Area Command about the incident.

“The following day, I was around the town when my neighbours informed me that the kidnappers are back to our house.

“I decided to go home and meet with them. On meeting them, they said, Oga we are looking for you, we came back for the settlement. I pleaded with them to relax that I have called my son to go and get the money. I asked them what drinks they will take, one said Gulder, the other two said they want Star beer while the remaining one refused to take anything and was monitoring my son’s actions.
He said his wife went and brought the drinks for them” and we started discussion and they said they will collect N2m. immediately, I gave my son signal to call the police who arrived on the spot.”
According to the cleric, when they noticed the presence of the police, they started shooting but the police arrested one of them after the gun duel. The others fled with heavy bullet wounds.” I thank God for saving me and my family. I also commend the police for their brave act.

Addressing journalists shortly after the incident, the  Police Area Commander in charge of Aba, Assistant Commissioner of Police ACP Rabiu Dayi,enjoined  residents of the city to always  volunteer useful information regarding hoodlums  to the police and other security agencies , assuring that his men are battle ready at any given time to come to the rescue of citizens. Who are under distress?

He said “I commend Pastor Origa for his courage, without this information, the police would not been able to arrest the kidnapper and they would have succeeded in collecting the N1m or more.
” We were able to arrest the kidnapper, others escaped with bullet wounds. We cannot allow criminals to take over the city, with the efforts of my Anti Robbery Squad, men of the Zone 9 and other police formations, the city will be uncomfortable for criminals.”

The police officer however, urged medical practitioners and residents of Aba city not to hesitate to report any one with bullet wounds in their area to the police for prompt action.