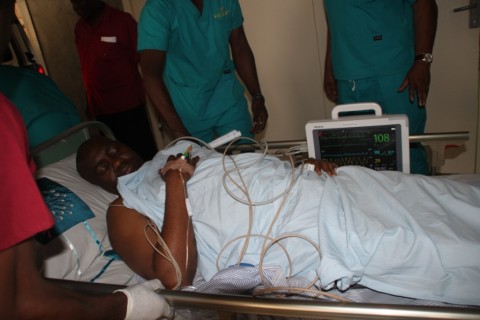 Senate Magnus Abe, who was shot on Sunday by the police at a political rally with rubber bullets, has continued to battle his life as doctors recommended that he be flown abroad for further medical treatment. 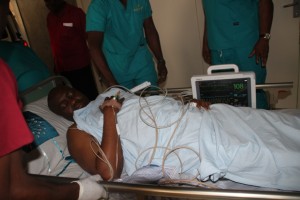 After the incident, Senator Abe was rushed to Krisany Medical Services, a private hospital in Port Harcourt, where he was stabilized before being flown to the United Kingdom for treatment.

The senator’s aide said his boss was shot two times by the Nigeria police force at a rally organized in support of River state Governor Rotimi Amaechi, a perceived political enemy of President Goodluck Jonathan.

And the police being an organ of the Federal Government of Nigeria have openly taken side to support the president in the protracted political crisis in the state following continued reign of impunity exhibited by the police commissioner Joseph Mbu.

At yesterday’s rally, the opposition party, All Progressive Congress (APC) alleged that the police, in addition with the rubber bullets shot severally, dispersed the crowd with heavy tear gas in which five people died after inhaling the substance.

The Chief of Staff to the governor Chief Tony Okocha, was also injured in the melee.

“We are holding the State Police Commissioner, Mr. Joseph Mbu, responsible for the deaths of five innocent kids that maybe our future political leaders by this agents of darkness and the attempted murder on Senator Abe and Chief Okocha since the shooting was carried out by a team of regular police and Mobile policemen from MOPOL 19 on the orders of CP Mbu.” APC Rivers lamented.

Meanwhile, Police have denied firing any bullets but confirmed they used “minimal” force to disperse the crowd.