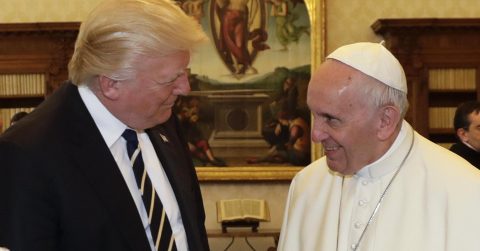 BALTIMORE, MD (AFRICAN EXAMINER) – US President Mr. Donald Trump in continuation of his ongoing foreign trip has met with Pope Francis at the Vatican to jaw-jaw on critical issues.

.After the 30-miniutes meeting, the Vatican disclosed that there had been an “exchange of views” on international issues, while Mr. Trump confirmed they had had a “fantastic meeting”.

The two Leaders have in the past clashed on various issues including: migration, climate change and a Mexico-US wall.

The US president was greeted by Archbishop Georg Ganswein, the head of the papal household, and escorted by the Swiss Guard to the offices of Pope Francis

From the start, Mr. Trump seemed subdued during their initial meeting, and Pope Francis was not as jovial as he sometimes with world leaders.

However, both appeared much more relaxed at the end of their 30-minute private meeting.

Speaking, the Vatican said later that they shared a commitment to “life, and freedom of worship and conscience” and expressed hope that they could collaborate “in service to the people in the fields of healthcare, education and assistance to migrants”.

On international affairs, their “exchange of views” covered the “promotion of peace in the world through political negotiation and interreligious dialogue”, and highlighted the need to protect Christian communities in the Middle East

After the meeting, they exchanged gifts. Mr. Trump gave the Pope a boxed set of writings by the civil rights leader Martin Luther King.

Also after the meeting, President Trump tweeted: “Honor of a lifetime to meet His Holiness Pope Francis. I leave the Vatican more determined than ever to pursue PEACE in our world.”