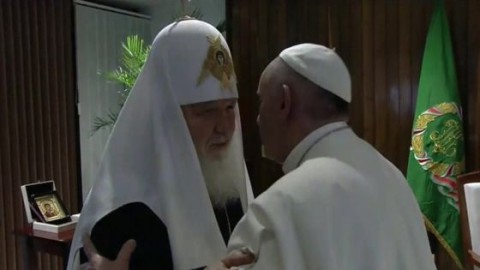 The meeting was the first between a Pope and a Russian Church head since the Western and Eastern branches of Christianity split in the 11th Century.

In a joint declaration, they also urged the world to protect Christians from persecution in the Middle East.

The Pope has now arrived in Mexico for a five-day visit.

A crowd of 300,000 braved the cold in Mexico City to welcome him to the country which has the world’s second largest Catholic population.

The Pope was greeted at the airport by President Enrique Pena Nieto.

The two-hour talks on Friday between Pope Francis and Patriarch Kirill were held at Havana airport.

Patriarch Kirill goes on to Brazil and Paraguay.

The pair embraced and kissed each other at the start of their talks.