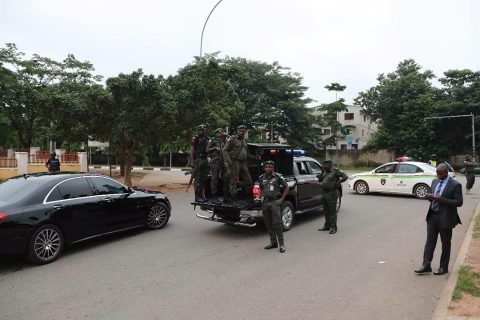 …Absolves Buhari of Any Involvement in the Raid

(AFRICAN EXAMINER) – The Presidency has reacted to the invasion of the home of the Senate President, Bukola Saraki and his deputy, Ike Ekweremadu saying the president has no hands in the controversial raid.

In a statement issued by Garba Shehu, Senior Special Assistant to the President

(Media & Publicity), the presidency frowned at what it described as an “orchestrated campaign against President Muhammadu Buhari each time a Very Important Person (VIP) is invited by the law enforcement agencies.”

“The law of the land is intended for all, not for the poor or those at the lowest rungs of the social ladder.

“It is odd, strange and bizarre that while ordinary citizens can be called up to answer questions or be interrogated, the VIP cannot be questioned without the annoying insinuations of partisanship, persecution or outright politicization.

“The workings of law enforcement agencies are set out in the constitution and the laws of the country. If they worked at the discretion of past presidents, who decided who to question and who to detain, Nigerians should get used to the fact that this President is different. President Buhari does not and will not influence or interfere with cases.

“The constitution clearly directs law enforcement agencies to promptly report and investigate any actual or potential infringement of the law and also initiate proceedings against all those involved.

“This President is not the one who directs them on what to do.

“The President’s constant refrain is that he will not tolerate any form of illegality including corruption and the law enforcement agencies have been given complete freedom to identify and bring all culprits to justice. His instructions to them are very clear: Anyone with a case to answer or found guilty should not be spared.

“Accused persons should approach the courts to plead their innocence rather than going to the public to plead persecution.

“The country is better served when the law enforcement agencies are allowed to do their work and we must stop the actors of this dangerous game of politicizing law enforcement.”

On Tuesday the Nigerian Police blocked the residences of the Senate President, Bukola Saraki  and his deputy with a view to arresting them but failed to make any arrest.

Some Nigerians have condemned the invasion describing it as political persecution.