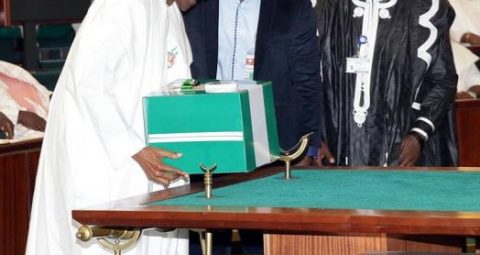 ABUJA, NIGERIA (AFRICAN EXAMINER) – After a week the Senate passed the 2018 budget, the Presidency Friday evening confirmed the receipt of the year’s Appropriation Bill from the National Assembly NASS.

Senator Enang also confirmed that the received copy of the budget was also being transmitted as he addressed journalists.

After the receipt, the respective Ministerial check follows, after which the Ministry of Budget and National Planning is expected to advise Mr. President to sign the bill into law or return it to NASS for amendment.

It would be recalled that President Buhari in November 2017 presented Appropriation Bill of N8.61 trillion, but NASS eventually passed N9.12 trillion budget – amounting to difference of N508bn between the Presidency and appropriated versions.