The President in a statement issued on Saturday by his Special Adviser on Media and Publicity, Dr. Reuben Abati, felicitated with Professor Soyinka, a globally-renowned academic, dramatist, poet and literary legend on attainment of another significant milestone in a long, very fulfilled and achievement-laden life. 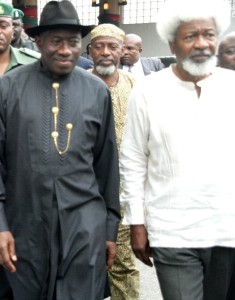 The statement noted as the literary giant enters the “elite club of the world’s highly revered octogenarians and very special people who have made very significant and indelible contributions to their countries and humanity”, the President joins Professor Soyinka, his family, friends, associates, readers and fans across the world in giving thanks to God “for his glorious life of service to the arts, his nation and mankind at large”.

President Jonathan applauded his life-long dedication and indefatigable commitment to using his acclaimed genius and talents, not only in the service of the arts, “but also for the promotion of democracy, good governance and respect for human rights in Nigeria, Africa and beyond”

“He will always be celebrated and honoured by his proud countrymen, women and children for his famed literary works and for his exemplary career which has inspired others to take up a life of selfless service to humanity” the President emphasized.