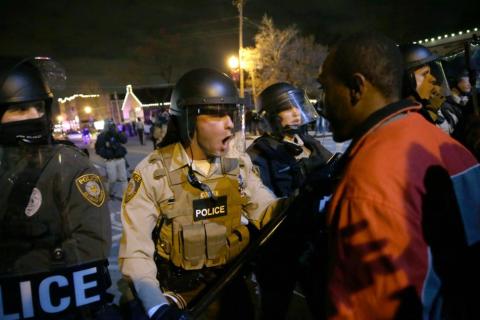 (Reuters) – Missouri’s governor ordered hundreds more National Guard troops on Tuesday to the St. Louis suburb rocked by rioting after a white policeman was cleared in the fatal shooting of an unarmed black teenager, while the local mayor said the governor did not do enough to protect businesses from looting.

Attorneys for the family of Michael Brown, the 18-year-old shot to death in Ferguson by officer Darren Wilson in August, condemned as biased the grand jury process that led to Monday’s decision not to bring criminal charges against Wilson.

The killing in Ferguson, a predominantly black city with a white-dominated power structure, underscores the sometimes-tense nature of U.S. race relations.

About a dozen Ferguson buildings burned overnight and 61 people were arrested on charges including burglary, illegal weapons possession and unlawful assembly, police said. Police said protesters fired guns at them, lit patrol cars on fire and hurled bricks into their lines. Police fired tear gas and flash-bang canisters at protesters.

“Lives and property must be protected. This community deserves to have peace,” Nixon told a news conference, saying about 700 guard troops were deployed on Monday and hundreds more will be out on Tuesday night to protect homes and businesses. He said there are more than 2,200 guardsmen now in the region.