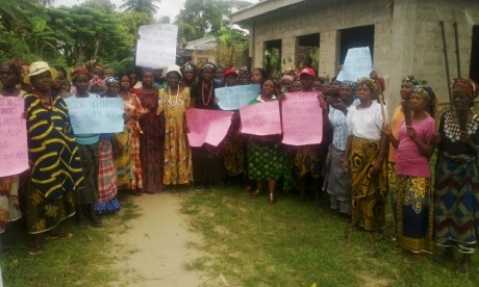 Africanexaminer gathered that women of the community decided to break their silence following regular occurrences of rape cases especially on both young and elderly women while at their farmlands.

The community women who came out to register their grievances during the meeting of the Arochukwu/Ohafia Traditional Rulers Council held at their Community, Ozu-Abam, wore black attire and carried placards with different inscription, “OADU stop supporting evil”, “Stop raping your Mothers”, “Stop these ritual killing, and if you release them, we will run away from this community”, further warned against any attempt to release the suspected culprits.

Some of the women who spoke with this reporter which include Madam Ogbeyialu Onyeani said that for over a period of time that the women in the community have been living in fear following the constant raping of the women by some hoodlums.

Onyeani said that they can no longer go to their farms because of the fear of being raped, “Many of my fellow women have been raped while farming in their farms and others killed for ritual purposes by some of those they alleged that have been arrested by the police”.

She said that one of the suspects who had been arrested recently confessed to some of the rape cases and the ritual killing which led to the arrest of some of those behind the abominable acts, but regretted that some powerful people from the community are making arrangement to release the suspects.

Another community woman, Maria Okoroafor recalled how she narrowly escaped death when members of the deadly group tried to kill her while she was in her farm.

Responding on behalf of the traditional rulers, Eze Chris Nwankwo of Eleoha-Ututu who is the chairman of the council thanked the women for their peaceful disposition while demonstrating over the abomination and warned against the repercussions on the youths in the event of such abominable acts.

Eze Nwankwo said, “It is an abomination in the sight of God for a son to see the nakedness of his mother, not to talk about having carnal knowledge of his mother. There are many repercussions that follow such acts, but I assure you that we are going to handle the matter now that it has come to our notice”.

However when contacted the state Police Public Relations Officer, Geoffrey Ogbonna confirmed the incident and said that the culprits have been charged to court for their criminal activities in that community and that it is now left for the court to do their job of dispensing justice.