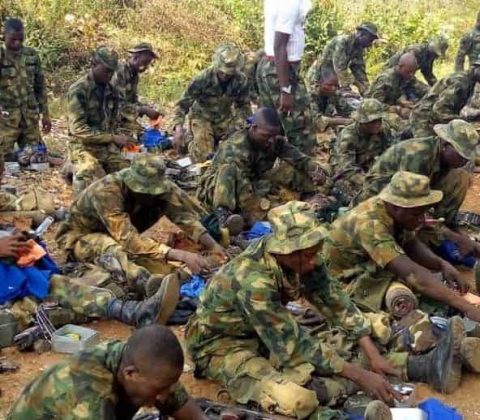 (AFRICAN EXAMINER) – The House of Representatives has resolved to investigate the purported voluntary resignation of 365 soldiers from the Nigerian Army.

This resolution was sequel to a unanimous adoption of a motion of Matters of Urgent Public Importance by the Chief Whip of the House, Rep. Mohammed Monguno (APC-Borno), at the plenary on Tuesday.

He said that the Nigerian Army had a staff strength of about 200,000 soldiers saddled with the responsibility of taking charge of land warfare operations as well as protect and defend the territorial integrity of the nation.

The lawmaker said that on June 22, 2020, a lance corporal in the Nigerian army, Mr Martin Idakpeni, in a video on social media, condemned the attitude of the Chief of Army Staff towards the attacks and killings of innocent Nigerians and soldiers.

He said that the officer also frowned at the untold hardship soldiers faced while conducting combat operations.

According to the lawmaker, on several occasions, Nigerian soldiers have disobeyed orders from superior officers in protest of poor welfare arrangements and alleged embezzlement of allowances due them by their superiors.

Monguno said that there had been cases of mutiny resulting in sporadic shootings and attempted lynching of senior officers by junior officers.

“Concerned that not too long ago, the General Officer Commanding 7 Division of the Nigerian Army in Maimalari, Maj-Gen. Victor Ezegwu, escaped being lynched by rampaging soldiers for leaving them with neither food nor water while fighting in the North Eastern part of the country for two days.

“On July 3, 2020, 356 soldiers which is a battalion, serving in the North East and other theatres of operations, wrote to the Chief of Army Staff asking for voluntary retirement from the force, citing loss of interest as reasons for their retirement,” he said.

The legislator said that military sources had attributed the alleged massive resignations to loss of morale, poor allowances and mass casualties in the hands of Boko Haram terrorists.

Monguno said that the sources also blamed it on lack of intelligence apparatus and fighting equipment as well as poor welfare packages for soldiers and their families by the army authorities.

He said rather than addressing the challenges, the Chief of Army Staff via a 17-page circular signed by Brig. -Gen. T.E Gagariga, graciously approved the voluntary retiremerit of a battalion of aggrieved soldiers in one swoop.

He said if the situation is not brought under control by nipping the influx of abled ex-army officers into the society without job security, it might become a serious security threat.

According to him, it is an impending military mutiny that may imperil our democracy, hence, the need to urgently tackle this impending menace.

Speaker of the House, Femi Gbajabiamila, mandated the Committee on Army to investigate the allegations and report back in one week for further legislative actions.