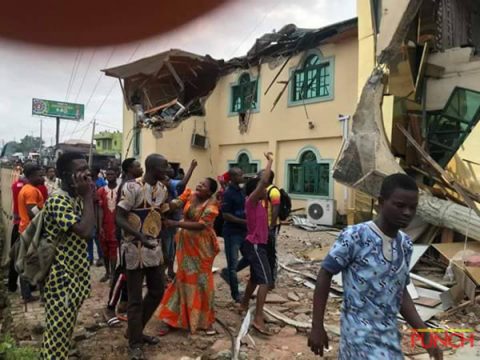 The News Agency of Nigeria (NAN) reports that the structure located on the Challenge-Toll Gate dual carriageway in Ibadan houses the popular Fresh FM radio station owned by the musician.

A  NAN correspondent reports that hundreds of residents had thronged the scene wielding placards with various inscriptions criticising the state government over the exercise.

Ayefele,  on his Facebook page after the demolition,  said:  “Oyo State Government did at last…..my pains, my sweat…So help me God.”

Some of the early callers at the scene of the demolished building were Mr Seyi Makinde, a PDP governorship aspirant and  Dr Wasiu Olatunbosun, the Secretary of  Unity Forum, a splinter group in the state chapter of the All Progressives Congress.

Also present at the scene was Hon.  Olusegun Olaleye representing Ibadan North State Constituency in the State House of Assembly.

Makinde, Olatunbosun and Olaleye, however, appealed to the irate residents at the scene of the demolished structure to remain calm, urging them not to resort to self-help.

Calls made to the Commissioner for Information, Culture and Tourism, Mr  Toye   Arulogun, were unsuccessful as his two cell phone lines were switched off.

NAN recalls that the state government had marked the structure for demolition, insisting that it contravened the state ’s planning laws.

But Ayefele had approached an Oyo State High Court sitting in Ibadan seeking to stop the planned demolition.

Ayefele’s counsel, Mr Olayinka Bolanle, in an exparte motion filed before the court, sought for an order of the court restraining the state government from demolishing the property pending the determination of the suit.

Bolanle also stated that due process was followed in the construction of the structure while relevant approvals were obtained from the state’s departments and agencies associated with land and housing.

Justice I. Yerima ordered the claimant to ensure service of the court process on the respondent and adjourned the case till Monday for the hearing of the exparte motion. (NAN)