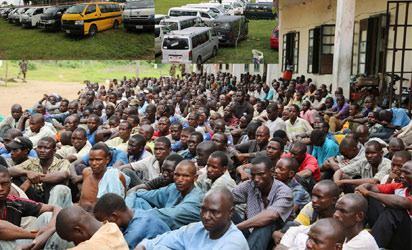 The Federal government  has disclosed 486 people arrested by security operatives on Sunday in Abia State were travelers.

Coordinator, National Information Centre, Mr Mike Omeri made this known at a joint news conference organized by the centre in Abuja on Wednesday.

Omeri  said the arrest of the travellers was not targeted at any group of persons or individual, but done in view of the general security situation in the country.

He said when the suspects were interrogated, one of them, who had been on the watch list of the Department of State Security Services since 2007, was identified.

The coordinator said that the incident further led to the questioning of the suspects, who were travelling in a convoy of over 30 buses with none of them having up to N1,000.

According to him, “Clearly, their mission was suspicious and had to be thoroughly investigated; we, therefore, appeal for the understanding of the public in allowing our security agencies carry out their legitimate duties.”