Rivers APC Blasts Wike Over His Outburst Against Amaechi, 2015 Election

The Rivers State Chapter of the All Progressives Congress, APC has blasted the Supervising Minister of Education, Chief Nyesom Wike over his comments that the PDP Government will arrest Governor Rotimi Amaechi immediately after the victory of President Goodluck Jonathan come 2015. 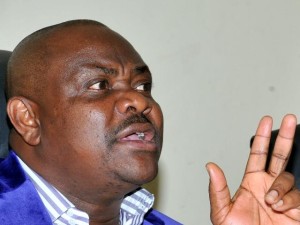 The party (APC) in an online press release by Chief Eze Chukwuemeka Eze stated: “We would have ignored this ranting of a drowning man we decided otherwise so that the public may not be tempted to believe Wike’s devilish insinuation that Amaechi has committed any crime for which he deserves to be arrested as soon as he loses his immunity as guaranteed by the Nigerian Constitution as a sitting Governor. Indeed, nothing could be further from the truth, for the alleged crimes exist only in the satanic imagination of Wike and his cohorts.

Continuing, the party said, “We, however, understand Wike’s frustration since, by taking the entire Rivers State with him to APC, Governor Amaechi has dealt Wike and his co-travellers in the sinking PDP a mortal political blow, as Amaechi has left with the soul of the party, leaving only the carcass for Wike and his cohorts to parade as a political party”.

“If anyone deserves to be arrested by the Economic and Financial Crimes Commission (EFCC), that person is Chief Wike, whose case file was being dusted by the EFCC before he was saved the embarrassment of arrest by Gov. Amaechi, who nominated him as a Minister, only for him to turn coat after the trappings of ministerial office went into his head.”