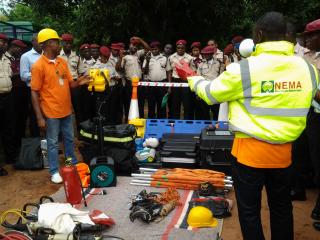 Worried by the alarming number of deaths recorded on Nigerian roads, the National Emergency Management Agency, NEMA, has opened a window of synergy between it and the Federal Roads Safety Corps, FRSC, as it organized training for staff of the corps on vehicle extrication and handling of victims of mass casualty during road crashes.

According to NEMA, the training exercise became necessary especially as this year’s  yuletide season (December) approaches. 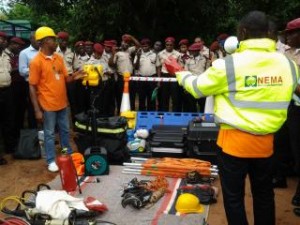 Speaking during the one-day exercise held Monday at ninth mile, Enugu office of the FRSC, southeast coordinator of NEMA, Dr. Bandele Abdulahi Onomode, stressed that the collaboration was to save maximum lives.

The agency, had through its research and rescue officer, Kingsley Okolo, demonstrated emergency rescue equipment and their uses before the FRSC personnel.

Onimode, regretted that “it is worrisome how Nigeria records between 100 to 120 road crashes on weekly basis with deaths put at 800 and above on same daily basis.

He added that  “the one day simulation/ training exercise on vehicle extrication and mass casualty handling of road crashes victims, collaboration” was an effort to reduce the number of mortality and morbidity by joining hands on rescue management.

Represented by the assistant zonal coordinator, Dr. Innocent Ezeaku, he noted that other countries of the world come to Nigeria to learn the country’s roads safety and emergency rescues, adding that what is required is to sensitize the citizenry better.

Hear him: “You know we are approaching the peak of ember month and we soon we will go into what we call operation eagle eye so we are just preparing ourselves for that exercise.

“It is all about how to extricate victims of road crashes in case it happens. That is to bring people out with minimum injury, to ensure that people who are trapped are removed so as to less morbidity and number of lives that are saved is increased.”

He called for more volunteers as special road marshals to complement efforts of FRSC and the police in combating growing traffic build ups in cities like Enugu to compliment the use of NYSC vanguards for such services.

The south east NEMA boss noted that what informed the seminar was the good collaboration between FRSC and NEMA especially after such an exercise that he said resulted to saving some lives in a fatal accident that took place at Ugwu Onyeama in Enugu.

In his brief remarks, Enugu state sector commander of FRSC, Fumubi  Olawuyi, who spoke through the ninth mile unit commander of the corps, Mr. Blaise Ezeani, had applauded NEMA for the training.

He however, identified bad roads and human errors as the two major factors responsible for incessant road crashes in Nigeria, just as he advocated adequate investment in road construction and rehabilitation by governments at all levels in the country.