Sacked Ministers are part of us -New PDP 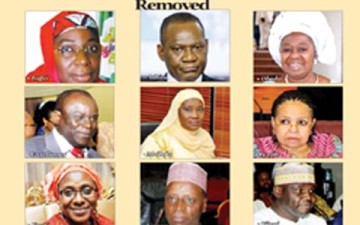 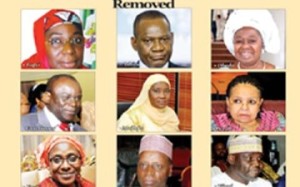 The new faction of the ruling People’s Democratic Party (PDP) led by Alhaji Kawu Baraje has claimed that the nine ministers sacked on Wednesday by President Goodluck Jonathan were booted out of office because “they were either nominated by us or sympathetic to our cause.”

A statement by the national publicity secretary of the new PDP, Chief Chukwuemeka Eze dismissed the Federal government’s excuse that the sack did not have any political undertone.

Hear him “No matter the flimsy excuses being given by the Federal Government over the sack of nine of our candidates from the Federal Executive Council (FEC), the truth of the matter is that these innocent Ministers were sacked because they were either nominated by us or sympathetic to our cause.

“We are aware that these Ministers had been under surveillance and denied the necessary tools to work with – in short, they were programmed to fail immediately they identified with us.

“Sadly, these innocent Ministers have been sacked while the most corrupt ministers whose atrocious activities are well known to Nigerians, are retained.

“The most pitiable case of these sacked Ministers is that of our mother, the Minister of Housing, Ms Amal Pepple, whose crime was approaching Mr. President to plead with him, even kneeling down to beg him to forgive Gov. Amaechi for whatever sins he is assumed to have committed against him.

“We wish to assure these victimised Ministers that their travails are temporary. They have nothing to be ashamed of; their fate is in the hands of God and their future is very bright. Therefore, rather than being sad, they should count themselves lucky for being part of the struggle to salvage our party

“We urge former Heads of State, Religious Leaders, Our Royal Fathers, Civil Society Activists and all men of goodwill to intervene before these misguided elements plunge this Nation into anarchy.”