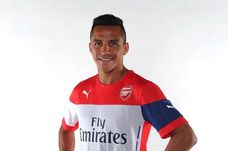 Arsenal have completed the signing of Alexis Sanchez from Barcelona for £35m, making him the second most expensive transfer in the club’s history.

Sanchez becomes the second high profile player to arrive at the Gunners from Spain following the £42.5m record acquisition of Mesut Ozil last summer, and will arrive at the club at the end of July following a post-World Cup break.

The 25-year-old, who spent three seasons with the Catalan club after joining in 2011, snubbed Liverpool in order to join Arsenal while Italian champions Juventus also missed out on the Chile international.

Arsenal manager Arsene Wenger told arsenal.com: “As many people have seen during the World Cup this summer, Alexis is a fantastic footballer and we are delighted that he is joining us at Arsenal Football Club.

“Alexis will add power, creativity and much quality to our squad and we are all looking forward to him joining up with us in a few weeks. He has consistently produced top-quality performances at the highest level for a number of seasons now and we are all excited to see him integrate into the Arsenal squad. I’m sure all Arsenal supporters will join me in welcoming Alexis to our club.”

Sanchez added: “I’m so happy to be joining Arsenal, a club which has a great manager, a fantastic squad of players, huge support around the world and a great stadium in London. I’m looking forward to meeting my new team-mates and to be playing for Arsenal in the Premier League and Champions League. I will give my best to Arsenal and want to make all the supporters happy.”

The Chilean will likely make his first appearance in red and white during the Emirates Cup which takes place on 2 and 3 August.

Scoring 24 goals in 71 internationals, Sanchez has grown into one of Chile’s most important players as the national team continue to grow into a genuine threat on the world stage. Having been part of the side that beat England at Wembley last year – where he got himself on the score-sheet – Sanchez has never faced his new club, having left Udinese before the two sides met in the Champions League play-off in August 2011 and Arsenal avoiding their old foes Barcelona since their 2010-11 European elimination three years ago.

It remains to be seen where Sanchez fits into Arsene Wenger’s plans, although it is a possibility that he will find himself in a more central role than he was afforded at the Nou Camp, either to partner or replace current striker Olivier Giroud. With the likes of a fit again Theo Walcott, Santi Cazorla and Ozil as well as young English midfielder Alex Oxlade-Chamberlain providing support, Sanchez’s pace and trickery will certainly prove a constant threat to the best defenders in the Premier League, and his addition is another positive sign for the North London club to regain the league trophy they last won in 2004.