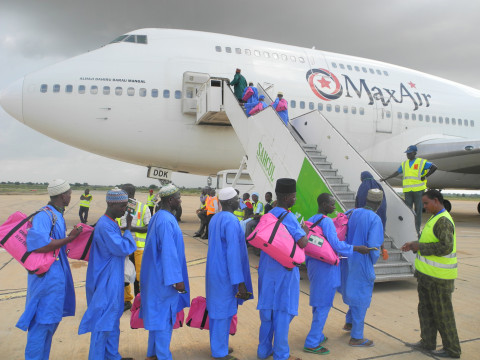 (AFRICAN EXAMINER) – Eight pilgrims from Kebbbi have fallen prey to the nefarious activities of some Saudi-based fraudsters in Madinah, losing their Basic Traveling Allowances, BTA.

The fraudsters, mostly Nigerians resident in the Holy land illegally often gained access to Nigerian pilgrims outside their hotel accommodation, where they lured their unsuspecting victims into shady business transactions.

The Leader of Kebbi State’s pilgrims in Madinah, Alhaji Abubakar Argungu, confirmed this to newsmen on Thursday in Madinah.

He said the that illegal money changers deceived the pilgrims, especially the elderly people, and dispossessed them of their money cash

“Our major concern this year is that “Tukaris” (illegal residents) have been cheating and stealing our pilgrims’ money. Eight of our pilgrims were defrauded of their BTAs.”

He decried the attitude of the state officials who abandoned their pilgrims to their fate on arrival in the Holy land.

He, therefore, appealed to state governments to always appoint credible officials with the fear of God to take care of pilgrims’ welfare.

He also urged the National Hajj Commission of Nigeria (NAHCON) to devise measures to protect pilgrims who engaged in “tooth cap glitz” and money exchange.

“Government should do this like it did by designating a single bank to collect fees for sacrificial animals during the Hajj.”

Argungu further urged the Hajj authorities in Nigeria to appoint more women to render various services to their counterparts, especially the elderly people in the Holy land.

NAHCON officials, especially its Madinah Coordinator Ahmed Maigari and the Civic Enlightenment Department, have at different fora, alerted pilgrims about the activities of such dupes. (NAN)