The Nigerian Senate has approved the extension of the emergency rule in Adamawa, Borno and Yobe States, one week after it received the request by President Goodluck Jonathan. 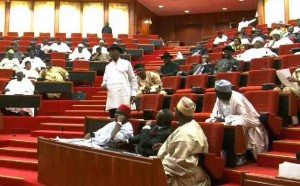 The upper legislative arm of government approved the request after series of meetings with service chiefs on Thursday, but deferred debate on the extension request till Tuesday plenary session where full military operations was proposed to be undertaken on a sustained basis to flush out the Boko Haram insurgents from the three states.

Jonathan had last Tuesday asked the two chambers of the National Assembly to extend the state of emergency in the northeastern three states due to continued threats of the insurgents.

While the House of Representatives approved the request last Wednesday, the Senate deferred debate on it, preferring to meet first with the service and security chiefs who it summoned to appear before it to brief the senators on the level of performance on the current emergency rule in the affected states.

The House of Representatives approved the extension of the emergency rule after a three-hour closed-door session with the service chiefs, who said that no election could hold in the three troubled states as Nigeria was at war.

The resolution of the upper legislative chamber followed a motion by the Senate Leader, Victor Ndoma-Egba, last week, asking that debate on the issue be stood down till another legislative day in other to receive briefing from the service chiefs.

“Secondly, it is the tradition of this Senate that we appraise and assess the performance of the state of emergency before we debate it,” he stated

The Deputy Senate President, Ike Ekweremadu, who presided over the plenary session however, noted that the motion was crucial because it played a major role in the security of the nation.

The senators from the North under the aegis of Northern Senators Forum, NSF, had after about a three-hour meeting on Thursday vehemently moved against the proposal for extension of the emergency rule but finally came to an agreement to the motion on Tuesday while making certain demand from the executive.

The Senate, while supporting the extension of emergency rule in the three northern states, made some demands on the Executive.

They include proper kitting and arming of the Armed Forces deployed to arrest insurgency and adequate welfare for the troops, as well as special recruitment into the Armed Forces, of screened and vetted youths, particularly those in the civilian JTF.

Other demands made were that the service chiefs, the Minister of Defence, Minister of Police Affairs, National Security Adviser and DG, Directorate of State Service (DSS) should report to the Senate on a monthly basis to brief lawmakers on progress made in combating the insurgency.

The Senate also asked President Jonathan to prepare and submit to the National Assembly, a supplementary budget to meet any financial requirement needed to combat the insurgency.