Six Persons Electrocuted At a Funeral In Anambra 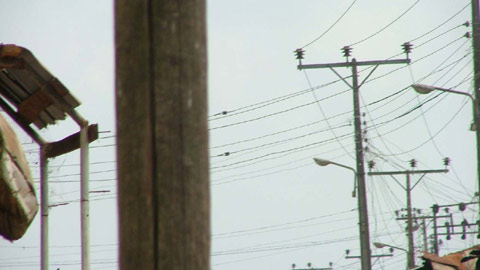 Tragedy struck on Monday at Nnanka community, in Orumba North council area of Anambra state as Six people were electrocuted by a 33kv high-tension wire.

African Examiner reports that the ugly incident which threw the entire community into mourning occurred during the burial ceremony of an illustrious son of the area, Sir James Ibe.

Our correspondent learnt that the unfortunate disaster happened when the victims were erecting canopies for the burial ceremony of the deceased.

It was also gathered that the victims had lifted the canopy to place it in the appropriate spot when the tip of the canopy touched the 33kv high tension wire and got the six severely electrocuted with one person dying instantly, while others were rushed to the hospital.

Some residents of the community who spoke to our correspondent under condition of anonymity described the incident as quite painful and tragic.

However, an eyewitness, Mr John Okafor, said the victims had set the canopy, and thereafter wanted to shift it to the other end so that it could be in same line with others when the incident happened.

“So immediately they lifted it up in other to carry it over to where it was supposed to be, it touched the EEDC High Tension wire and six of them were electrocuted.

“When the wire touched the canopy, six of them fell down and one died instantly; one was extremely critical and was rushed to Nnamdi Azikiwe University Teaching Hospital, Nnewi and others who were very critical were equally rushed to different hospitals”.

Secretary-General of Nanka Community, who does not want to be quoted had flayed the authorities of the Enugu Electricity Distribution Company, (EEDC) for their “lackadaisical attitude towards the incident”, regretting that the officials were unperturbed about the situation.

He further alleged that the deceased had made concerted efforts towards the relocation of the high tension line but was charged to pay huge amount which he couldn’t afford at the time.

“We called the EEDC officials immediately. They came but instead of doing something about it, they started blaming the community for the incident.”

It also gathered that one of the victims, identified as Chekwube, who died on the spot, was preparing to pay the bride price of his wife to be before he was sent to his untimely grave.

His elder brother blamed the officials of the public power supply for the death of his brother, saying it was out of their carelessness.

When contacted, the Enugu Electricity Distribution Company Business Manager, at Ekwulobia, was unavailable for comments.

Reacting to the incident, Anambra State Police Public Relations Officer PPRO, Mr Emeka Chukwuemeka, who confirmed the sad event, said that the police have stepped into the matter.