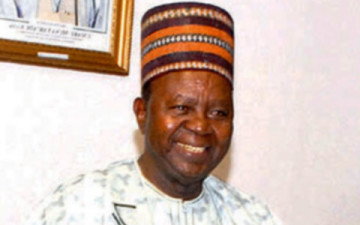 Former Deputy Senate President, Alhaji  Ibrahim Mantu has disclosed how the pioneer chairman of the People’s Democratic Party (PDP) and second republic governor of Plateau state, late Solomon Lar rejected  attempt by the presidency to stop Hon Aminu Waziri Tambuwal from becoming the Speaker of the House of Representatives. 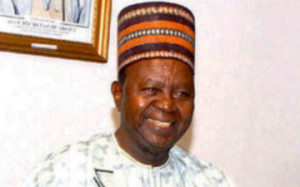 Receiving the Speaker at the Abuja residence of late Lar on behalf of the family, Mantu said there were moves to draft the late politician to persuade Tambuwal and his supporters in the House to jettison his interest to contest for the speakership and support the PDP’s decision that zoned the position to the South-West.

Hear him “When you were elected as Speaker, I was with late Lar when they came to this house telling him that you have violated the party’s decision, and he should intervene and advise you to toe the line of the party.

“He not only expressed disappointment with the request, but insisted that you did nothing wrong as it was a democracy in action, and vowed never to intervene. He later went to the Villa and asked them to allow the wish of the majority to prevail.”

The former Deputy Senate President who praised Tambuwal’s leadership said with the manner House is being run, he has no doubt the late politician died as a happy man.

Earlier, Speaker Tambuwal described the death of Lar as a special loss to the House of Representatives considering that he was at a point a parliamentarian, while his daughter, Benny is a serving member of the House.

Nigeria, he said, would miss the wisdom and selfless leadership of the late politician and prayed for the emergence of crop of leaders that would continue from where he stopped.