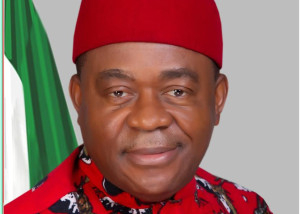 Our correspondent reports that the incident happened last Friday while Mark was on his way to attend the funeral of his long time friend and father of the Imo State Chairman of the ruling Peoples Democratic Party (PDP), Sir John Anyaehie, in Nkwerre, Imo State.

Reacting to the incident Saturday in Umuahia, Governor Orji described the attack as “wicked”, and an act that would not be tolerated by the governors of the zone.

He called on security agencies to investigate the attack allegedly aimed at sending the Nigeria’s number three citizen to his untimely grave.

The southeast governors chairman, also warned that the incident was an indication of what will confront the nation in the build up to the 2015 elections.

“He went there for the burial of an illustrious son of Imo State who died, and may be they thought he was in the convoy and shot at his vehicle. You and I know it was aimed at eliminating him.

“It is not Boko Haram. This is one of those things you see when election is around the corner.

“To target the Senate President is what baffles me and you know he belongs to a political party. What we are saying is that this kind of thing should not rear its ugly head in the zone. This is a peaceful zone and a comfortable zone for the PDP.”

Orji said while he was not yet accusing any individual or group, there is need for those who are quick to take up arms to remember that no one holds the monopoly to violence

Meanwhile, African Examiner gathered that those who perpetrated the attacked are suspected members of the Movement for Actualization of sovereign state of Biafra MASSOB.