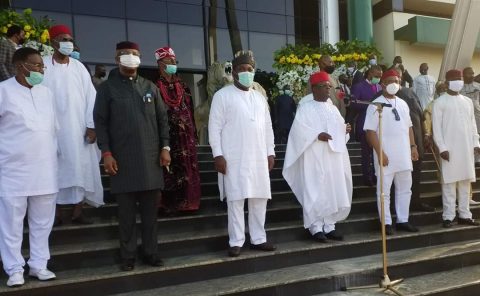 (AFRICAN EXAMINER) – The Southeast Governors Forum has resolved to further engage the Nigerian Center for Disease Control ( NCDC) to scale up testing of Corona Virus in the zone, just as it directed its people living outside Igboland to obey all extant orders relating to the pandemic.

The forum made this known to newsmen on Sunday via a communique at the end of the enlarged meeting held in Enugu, presided over by its chairman and governor of Ebonyi State, Engr. David Nweze Umahi.

On the issue of security, as it relates to community policing,  the forum stated  that the recent communication from the Inspector General of Police, (IGP) Adamu Mohammed to “our governors on community policing composition is not in keeping with the agreement we reached with him during his last visit to the South East”.

“In the circumstance, we cannot begin implementation of it until the programme reflects our earlier agreement. The South East Governors and their leaders request the IG to revert to our initial agreement reached on community policing at Enugu” the forum stated.

The governors equally agreed that all South East States Houses of Assembly should commence the process of enacting of state security laws in line with South East Joint Security Programme.

According to the communique, the meeting also agreed to hold vitual meeting with the Group MD of NNPC on the issue of linking the  South East State capitals with gas pipeline alongside with the pipeline programme of the Federal Government of Nigeria, which is running from Imo to Lagos.

On the issue of rejigging the economic sectors of the zone, the governors resolved to set up committees “in our various states, work with the federal government, world Bank, CBN, and NSIA, in their various programmes lined up to rejig the economy , especially in areas of Agriculture, SMEs, and solid minerals.

Also in attendance were, President General of the apex Igbo socio cultural body, Ohaneze Ndigbo, Chief Nnia Nwodo, chairmen of traditional rulers council in the five states of the zone, representative of Christian Association of Nigeria  CAN in the zone, among others leaders.